The Nexus is a Location in Demon's Souls and Demon's Souls Remake. The Nexus is a hidden temple that "binds together the northern land of Boletaria." It binds the souls of all would-be demon soul hunters so they cannot leave; they can only travel to the 5 worlds connected by the archstones. This is your place of retreat and refuge, which contains a variety of NPCs and vendors to aid you in your journey.

This sacred space, which holds together the northern land of Boletaria, connects to all other Archstones across the earth. The Old One is contained inside the nexus, where the Monumental awaits the slayer of Demons. 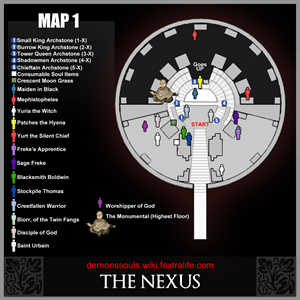 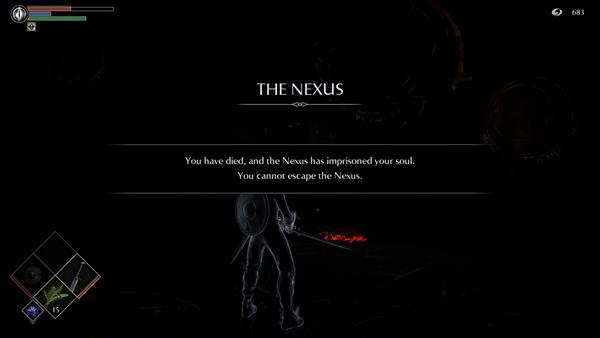 The Nexus acts as the hub world in Demon's Souls and Demon's Souls Remake. You are treated to a short cutscene explaining how you can't escape The Nexus but you can travel between worlds thanks to the Archstones. You'll receive the Nexial Binding upon awakening. 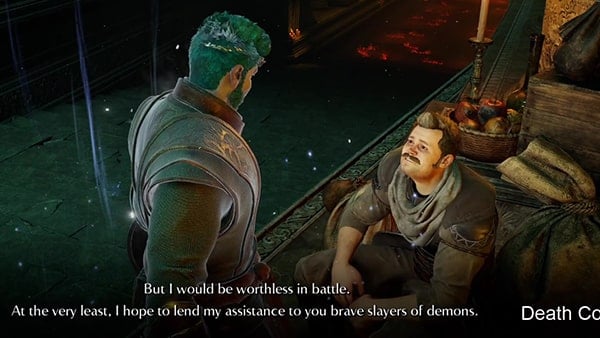 Behind you, slightly to your left, you find Stockpile Thomas. He offers to lighten your load by looking after the excess baggage you may carry. You can deposit an item, withdraw an item, talk to him, and leave. 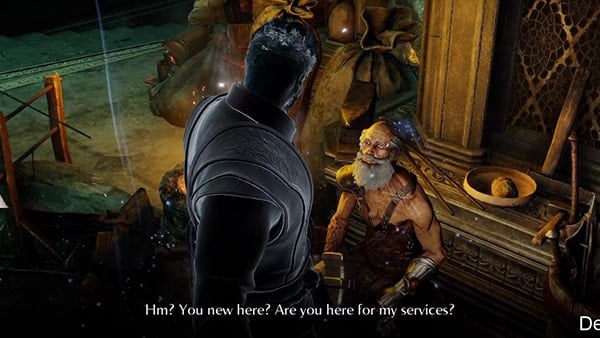 Next to him, you find Blacksmith Boldwin. He offers his services in exchange for souls. Boldwin can upgrade your weapons, repair equipment, sell items, or talk. 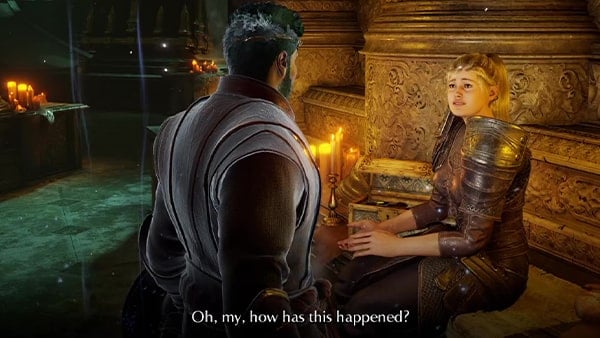 Turn around that column, and you find the female Worshipper of God. She doesn't sell you anything, you can talk to her only at this moment. 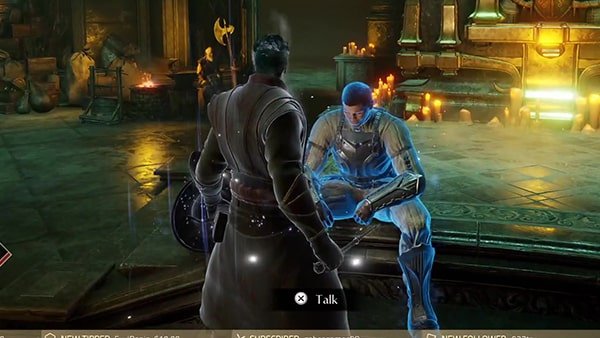 On the left side of your starting point, you find the Crestfallen Warrior. He points you towards the Boletarian Palace Archstone. 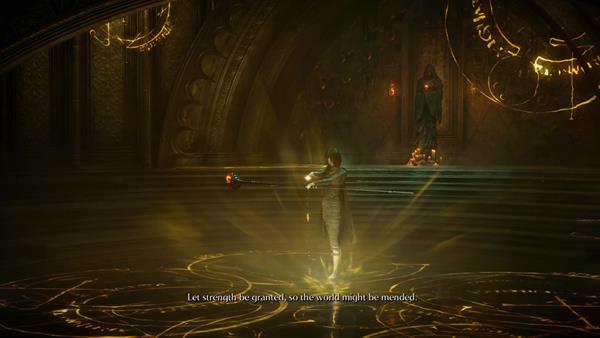 Straight ahead of your respawn point, you can see The Maiden in Black. She can upgrade your stats for souls, but you can't do that until Phalanx is defeated. 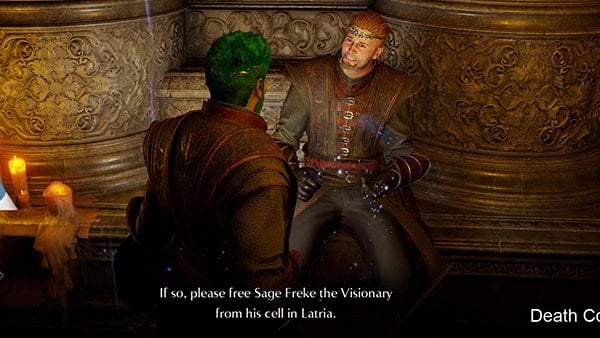 On the right side, behind a column, you can see Freke's Apprentice. He asks you to free Sage Freke, The Visionary from the dungeon of Latria. 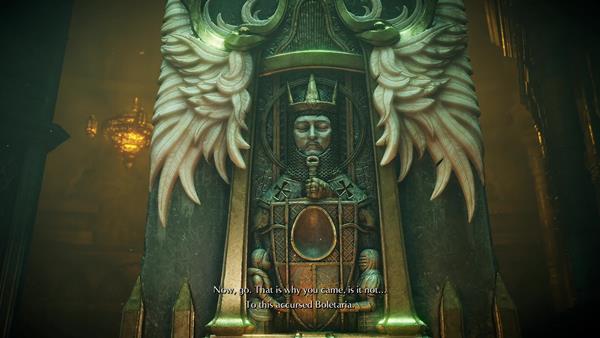 Behind the Crestfallen Warrior, interact with the Archstone to travel to Boletarian Palace.

Return to the Nexus 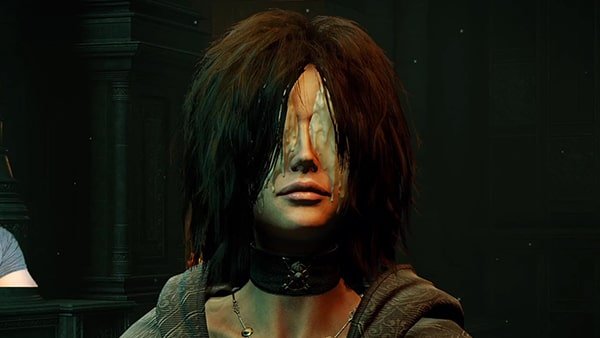 After defeating Phalanx, you activate the Archstone and return to The Nexus. You will be received by The Maiden in Black. She tells you that The Monumental is waiting for you.  Once the cutscene ends, go through the two sets of stairs until you arrive at the top of the building. 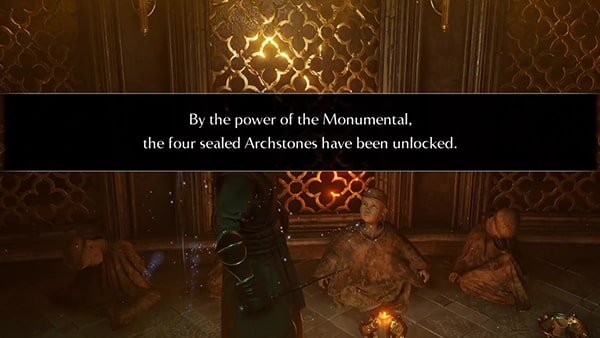 Take another set of stairs, until you arrive at a balcony full of sitting bodies. Find the one with a lit candle in front of him, that's The Monumental. He tells you his story, and you are treated to another cutscene. After the cutscene, you are told that the four sealed archstones have been released. As stated in the White World Tendency part, The Monumental will ask you if you accept this mission.

Once finished with him, go to the end of the corridor to the left. You will notice a small gap, go down there all way to find a lootable corpse containing x1 Stone of Ephemeral Eyes.

Now go back but this time turn left and keep going up. You will arrive at a door that asks you if you want to enter the Pantheon. Do so. Pass the archway and turn left and go until the end of the corridor to obtain another x1 Stone of Ephemeral Eyes. 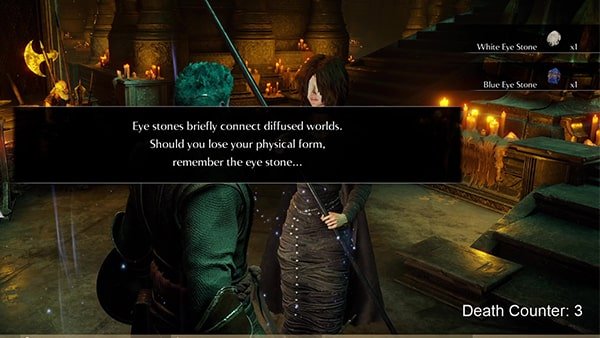 Go back all the way to the central part of The Nexus and talk to The Maiden in Black to receive x1 Blue Eye Stone and x1 White Eye Stone. Talk to her again to level up, spending the souls you've gathered during your journey.

Touch the Archstone of the Small King again, and this time select Phalanx Archstone. Nevertheless, you can select and visit any world in the order you prefer.

During your playthrough you will encounter many NPCs that will eventually stay at The Nexus full time or for a period of their own journeys. 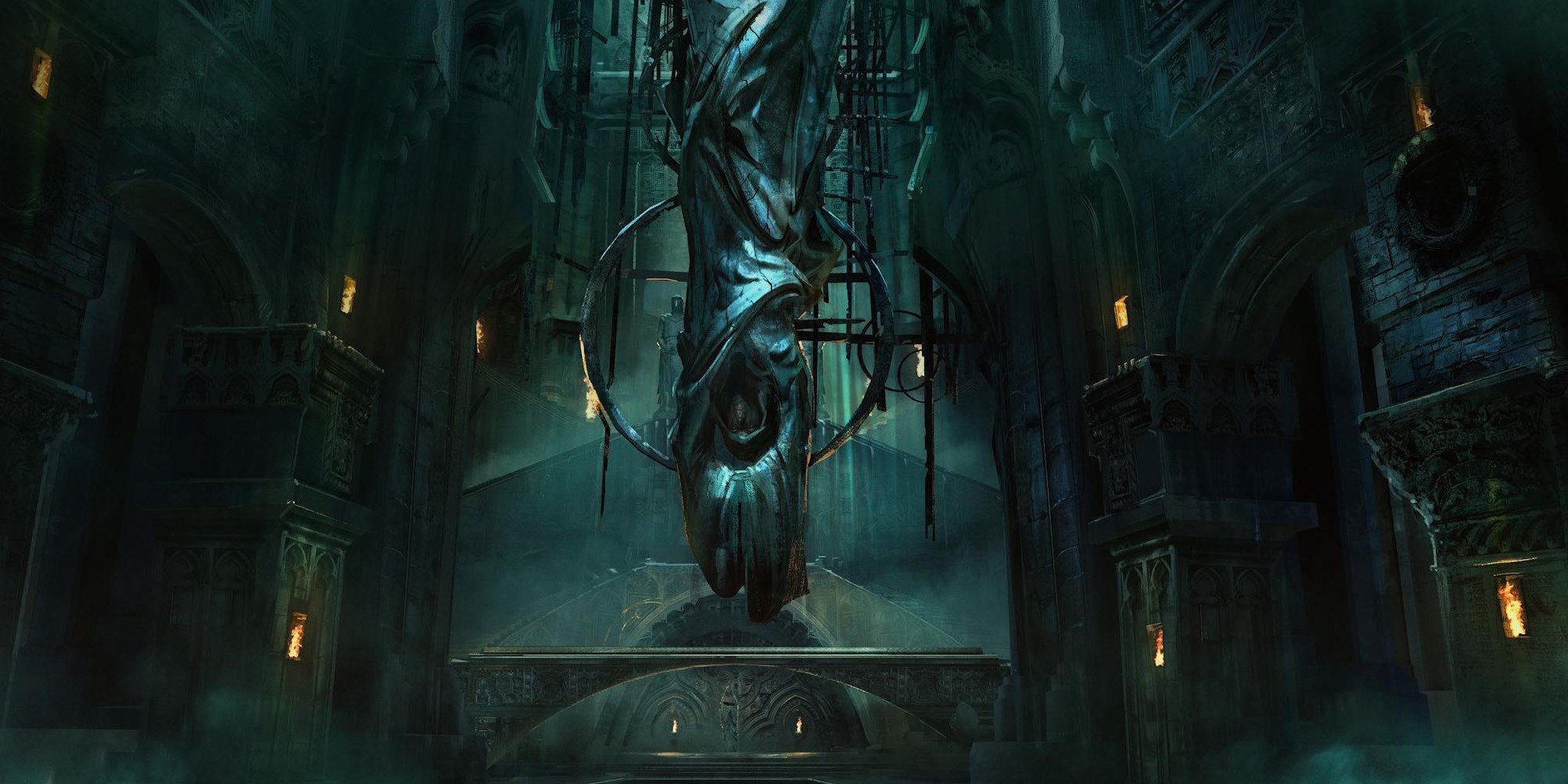