Armor Spider Archstone is a Location in Demon's Souls. Archstone of the Demon Armor Spider
The Tunnel City... Below the smithing grounds lies a huge tunnel worthy of its name. It's said a dragon's grave is in the deepest part of the molten area. 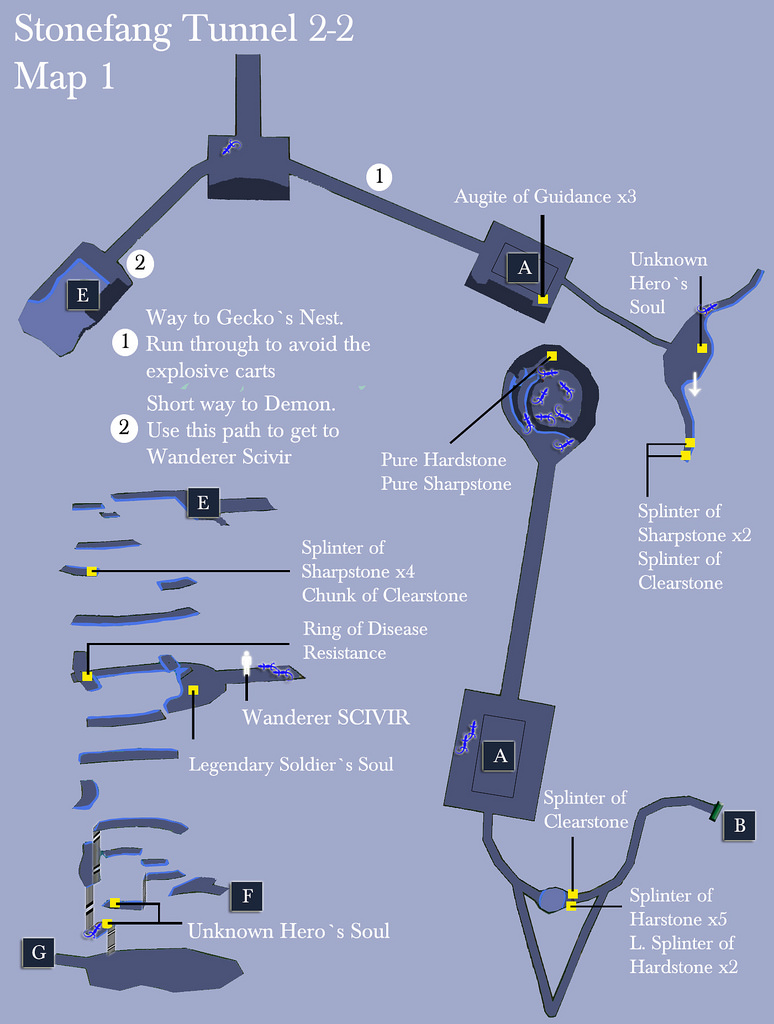 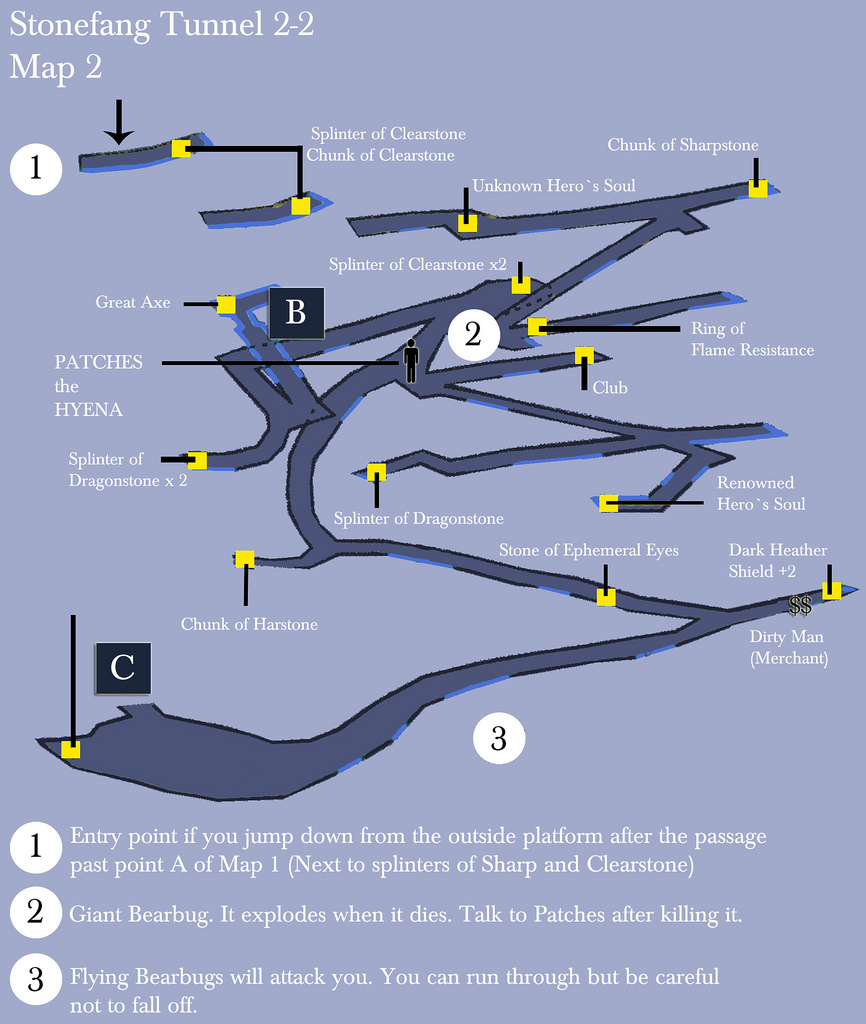 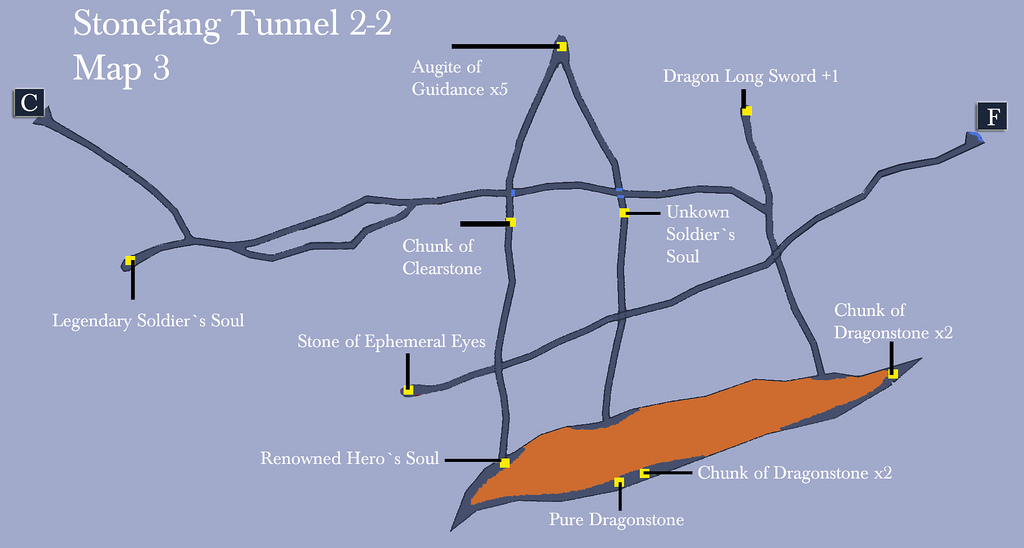 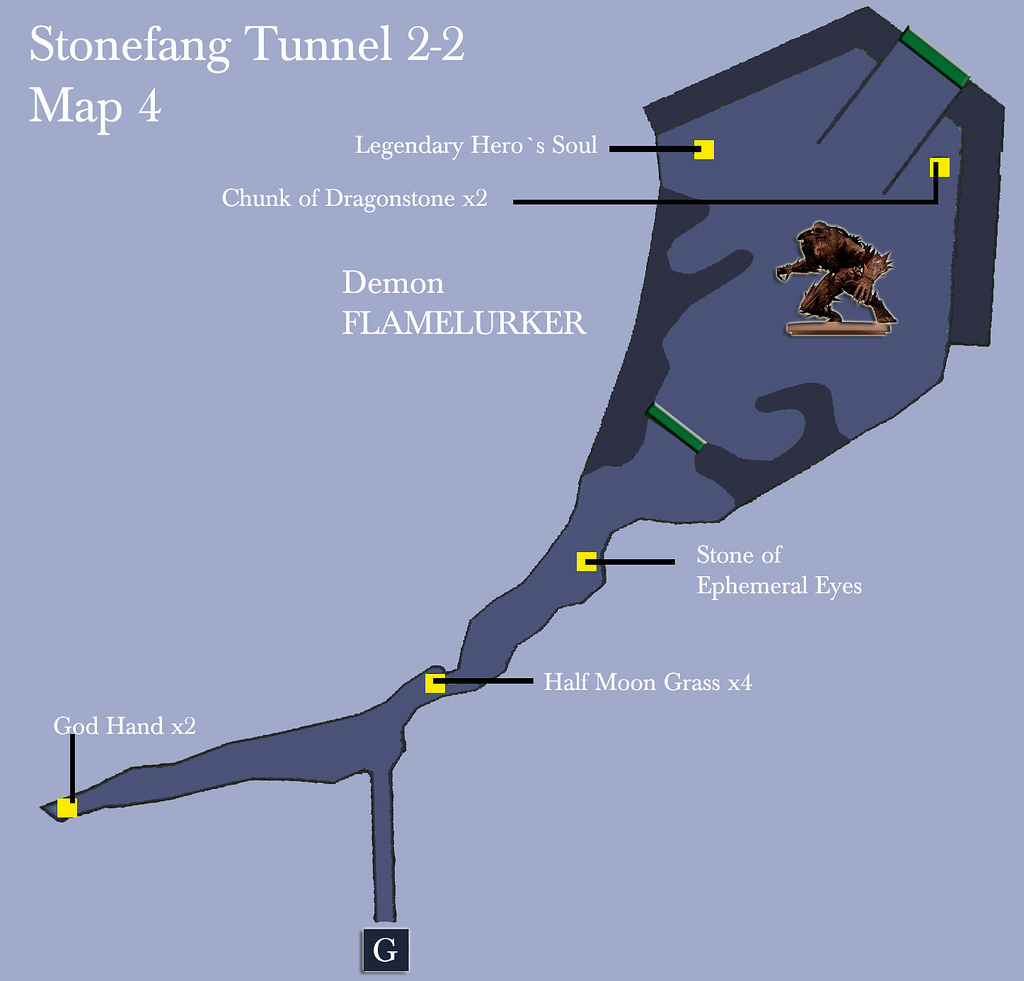 NPCs in the area

Scirvir, The Wanderer shows up. Show him the Dragon Bone Smasher from Flamelurker Archstone for a Pure Greystone. Pure White World Tendency required.

After defeating the Demon Armored Spider, you can access this area, that has the most Crystal Geckos of any other area in the game.

From the startpoint (Armored Spider Archstone), you can chose to go right or left. You will see a Crystal Gecko inmmediately ahead of you, however there is also a pickaxe miner on the way, so be careful. The Gecko will flee towards point 2 on Map 1: there are many enemies awaiting so proceed with caution!

You will have to carefully drop down a series of ledges until you reach the bottom and point G, that is very close to the boss area. There are items and Geckos down this path, and you can meet Wanderer Scivir if you have Pure White/Black World Tendency.

This is a shortcut to the boss, so you will miss many important items from the other path. Be sure to bring the Cat`s Ring with you if your dextrexity is low, as you will be taking damage from the drops from platform to platform. To figure out the path, watch your surroundings closely and take small steps. There are messages from other players in many of the hard spots.

Once you reach the bottom, some earth worms will appear. These enemies are easy for magicians, all you have to do is lock onto the head and shoot one spell (not fire) and the worm will die. For melee users, it could be best to just run through them, but if you must kill them try using a bow or crossbow, or a big sword with long range (Like the Penetrating Sword)

Proceed towards point G to enter the last area before the boss. You can skip to the last section of this page if you have come this way, as you are now in point G of Map 4

If you go towards point 1 of Map 1

You will see some carts with a shining orb coming towards you. These orbs explode when you get near them, so you have two options:

Run through the whole tunnel until you have cleared the third cart
Wait until the three carts have come to the center of the room, get close to activate them and run away.

Whatever your method, right before you reach the platform marked as point A, you will be attacked by a Fat Minister. You can take advantage of the pillar in front of him to have it block his magical attacks.

Now, once more, you have a choice.

This area contains many enemies called Bearbugs. These annoying creatures have very high physical defense, so Magic is the best weapon against them. Fire magic, however, has little effect.

You should first carefully drop down the platforms and go towards Patches the Hyena. He will tell you about a trasure next to the Giant Bearbug marked as point 2 on Map 2. You can kill the Bearbug with patience, as it will not fight back, but make sure to run away as it dies, since it explodes and this can kill you. After you defeat it, talk to Patches again.

Even if you chose to ignore most of the enemies, you can still collect many items. The Crystal Gecko here, however is hard to kill, as he flees towards three earth worms, making it hard for you to follow. You can find the Dirty Man vendor here, he has Large Splinters for sale to stock up if you need. There is also the DARK HEATER SHIELD+2 behind him.

Next you should walk towards exit C. Marked as point 3 in Map 2 is the area where a swarm of flying bearbugs will attack you. You can ignore them and rush forward. More earth worms will appear, keep running or the bearbugs will catch up with you.

You are now at point C of Map 3

These area is very confusing and has Giant Bearbugs that are hard to see and very strong, so be sure to have Soul Light spell to kill them. Use the map to guide your way, but overall your aim should be to:

If you want to gather all the items, you should wear the Ring of Flame Resistance and a good Fire Defense armor, as the hot lava pool will take a lot of your health. You should first kill all the bearbugs and then cast Total Protection, then run and stop in one of the isles to eat some grass before you pick up the item

You are now at point F of Map 1

Simply drop down and kill the earth worms that appear, then continue towards point G.

You are now at poing G of Map 4

From point G, move forward and left. You will have to kill some earth worms to obtain the HANDS OF GOD (Unique weapon). Once that is done, walk towards the fog (green in map 4) and look for Blue Eye Stone markers to invite ally phantoms if you are alive. You will now fight the Demon Flamelurker.

It is best to have an allied blue phantom to distract him.

There are two areas that the Lurker does not enter easily, the first one is a carcass to the right to where you first entered, the second one another carcass to the left far side from where you entered.

If you use these locations as shields, he will get "stuck" and you can use your ranged magic to attack him. However it does not last long and you will have to change positions.

If you choose to attack in the open, ranged magic whilst rolling in a big circle in the whole arena is the option. For melee attacks, have your partner distract the Demon and attack him from behind, but beware of his explosion attacks.

After you defeat him, you will get the Red Hot Demon Soul. Do not consume it. You should now go to talk to Blacksmith Ed, and if you give him the Demon Soul he will be able to forge high quality weapons for you (using all stones, etc)