Phalanx is a Boss in Demon's Souls and Demon's Souls Remake. Bosses are special enemies that feature their own arena, a large and prominent health bar with its name indicated, a variety of unique moves and abilities, an ambient boss theme, and an Archstone that appears upon their death. Most bosses appear once the player passes through a fog gate nearby.

Phalanx is found behind a locked door straight from the start of  World 1-1 (Boletarian Palace or "Gates of Boletaria"). Find where the lever to open the locked door is located in our walkthrough video at 38:45. Click here to watch it. 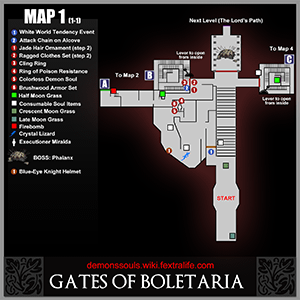 The Phalanx is named after a defensive tactic used by the ancient Greeks, most notably the soldiers of Sparta, the Spartans. It entails forming a sort of wall using a group of soldiers' shields and thrusting at opponents with spears from behind the wall. The wall could also be tilted upward to deflect incoming arrows.