Phalanx Archstone is a Location in Demon's Souls. Archstone of the Demon Phalanx. Past the huge Boletarian castle gates lies the Cliff Pathway, now a feeding ground for dragons, which leads to the inner ward, where the knights live. 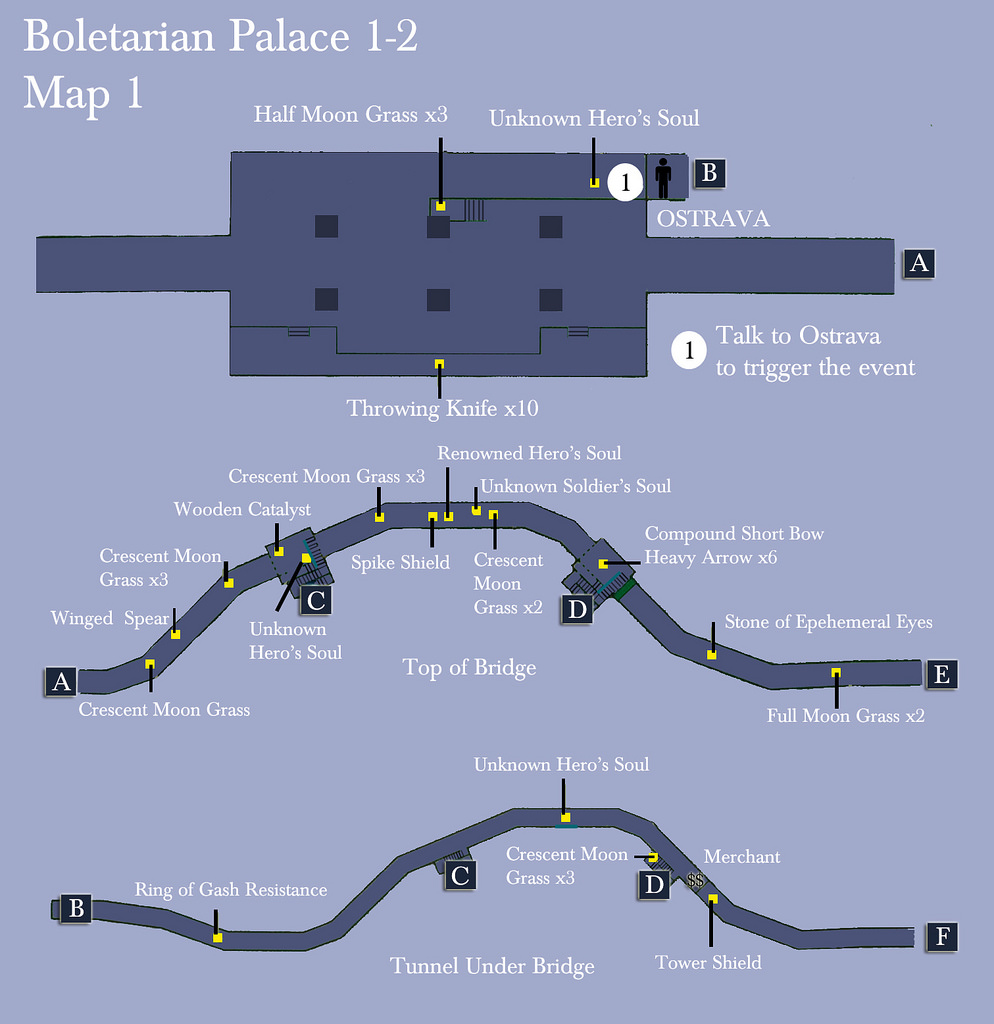 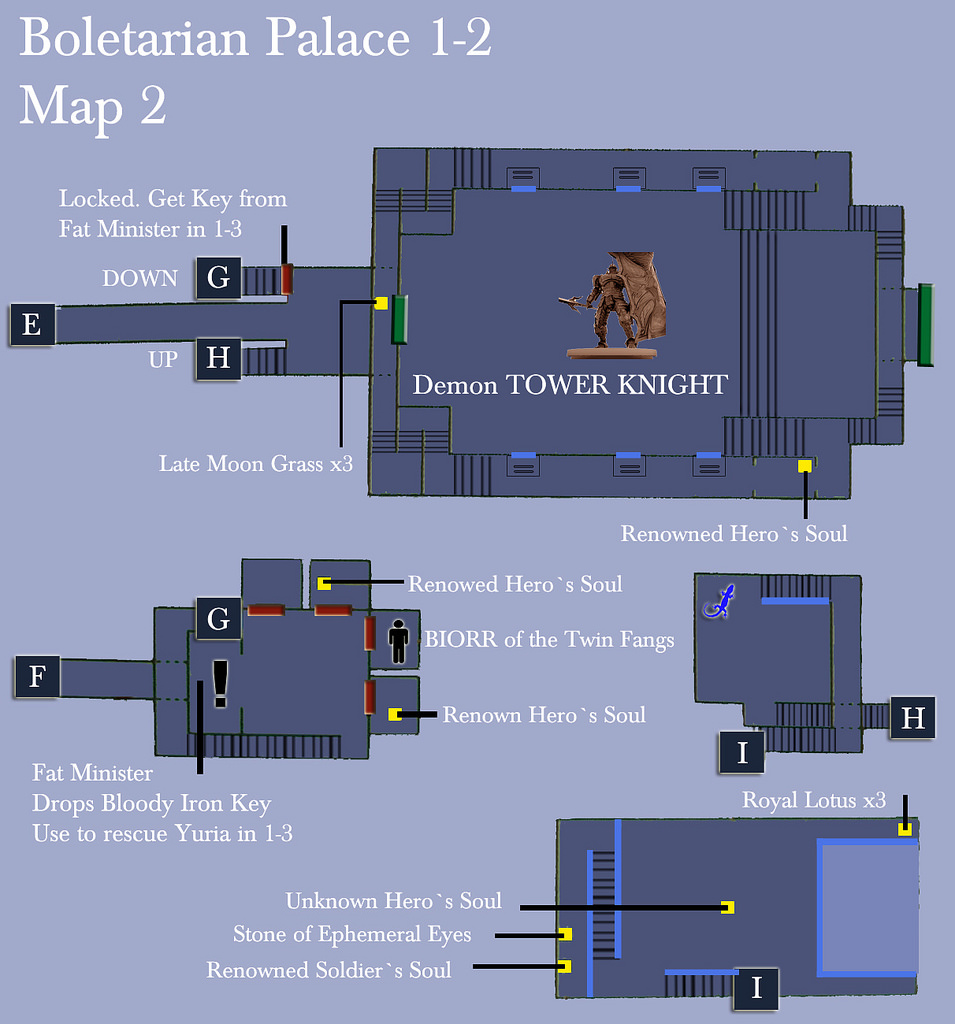 After you defeat the Demon Phalanx, you will gain access to the second area of the Boletarian Palace. It is advisable to do some grinding and leveling up in other Worlds before coming here, as you will need fire resistance to survive the level and strong spells to kill this boss.


Starting from the Phalanx Archstone, you are now proceeding towards point A in Map 1

In the first room, camouflaged by the overall darkness, are mini-phalanx enemies. You should run through to the other end of the room and use their attacks to identify their positions, then backtrack and kill them by using their weak spot: their backs.

Once you have killed them and collected the many ores they drop, look for point 1 as marked in the map above. Here you will meet Ostrava, who is again entrapped and in need of assistance. Talk to him to trigger the quest and then walk towards point A

From point A, you will soon notice that the Red Dragon is flying in a circle and torching the way with his fire. To avoid being killed by it, your only choice is to run after him right after he passes, IGNORING all items until you reach the safety of the next structure.

Do not continue forward:  go outside and climb up the stairs, and kill all the guards to get a WOODEN CATALYST that will enable you to learn and practice magic.

After defeating those enemies, head down all the way towards point C, to enter the tunnel under the bridge.

Once down, go left towards point B, killing everything in your path, until you reach Ostrava. Talk to him to end the side quest. You should be aware that he can be killed by enemies, so make sure to kill everyone before you rescue him.

Once that is done, you should go back the way you came from and either continue along the tunnel or go back up to the bridge top. If you choose to go up, remember to ignore all items in the way, or the Dragon will kill you. Look for the pattern to time your dash, and find refuge from the fire behind the carriage that is just before the structure: you can, from here, aim and kill the archers that attack you.

If you chose to go down, pay close attention to messages from other players, as there are a couple of ambushes and some fierce wild dogs waiting to attack you en-masse. At the end of the tunnel, you will again meet the Phalanx Archstone vendor. You can see an item shining behind him: you cannot reach it yet, you will have to complete Tower Knight Archstone before that area becomes available.

Once you are at point D, go back to the top of the Bridge and wait for the dragon to kill the enemies on the way. You will now have to dash forward, but you will be received by archers and a Blue Knight at the end of your dash, so this is tricky. In order to preserve stamina and be able to block/attack, follow this technique:

Equip light armor that does not affect your stamina regeneration
Have a quick weapon and a strong weapon on your right hand.

After you defeat the second Blue Knight, look for a stairway to your right, marked as point H in the map above.

Go up the stairs quickly and get to the Crystal Gecko (Marked as red triangle above). Kill it to obtain ores, and go up the stairs to the roof if you want the items. You will have to kill 2 crossbow soldiers here.

Once you are ready, cast a protective spell and walk through the fog to fight the Demon

It`s best to have:

First, run to the right or left and up the stairs. Your objective is to kill ALL archers on both sides. Once you have done so, secure a position in one of the archer`s sniper points.

The Knight will attack you with a ranged spear spell.  Use R3 to lock onto his head. Learn to time a roll backward to avoid being hit (you can also use the wall to cover you, but sometimes it does not work). As his attack misses you, he will cover himself with the shield. You should watch his movement and, as soon as he is generating another spear, you should unleash arrows/magic on him. This will give him no time to cover himself from your attack.

Continue like this until he dies or, if you are using Death Cloud, wait until he is paralyzed, jump down, and then do heavy melee attacks to his head for massive damage.

It is a slow process to kill this boss, and if you are a melee user you will likely have more trouble. For melee users, you should have leveled up enough to have a decent physical defense and stamina, and a strong melee weapon. Use any sort of protection that you have available.

After you have killed all the archers, jump down and learn the timing/warning signs of the Demon`s attacks. Your objective is to attack his ankles, which will eventually cause him to fall.  The most effective way to do this is to run through his legs immediately and then stay behind him, being careful of his "jump backward" attack. When he falls, you get a chance to hit his head for mayor damage, but you should be careful not to be killed by his weight when he hits the ground. If you see your health depleting, run upstairs towards safety to heal yourself.

After you kill the Demon, a new Archstone appears and gives you the Iron Soul. Do not consume it: you can learn the very useful "Total Protection" spell using this Demon Soul.

The next area, Tower Knight Archstone, is behind a "Thick fog" and you cannot gain access to it until you defeat any of the main demons of any other area (Dragon God, Old Monk, Stormking or Maiden Astraea).