Boletarian Palace is a Location in Demon's Souls. The Boletarian Palace features a huge stone castle in the northern kingdom of Boletaria. Hungry soldiers whose souls have been stolen by demons attack trespassers, and terrible dragons nest there. 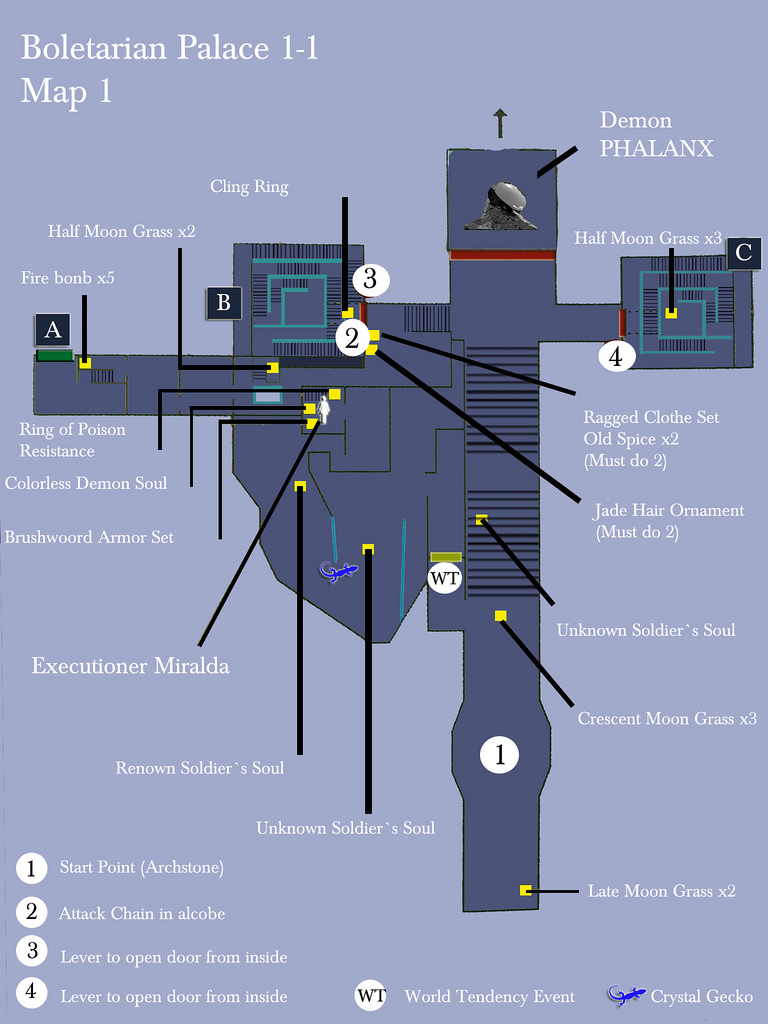 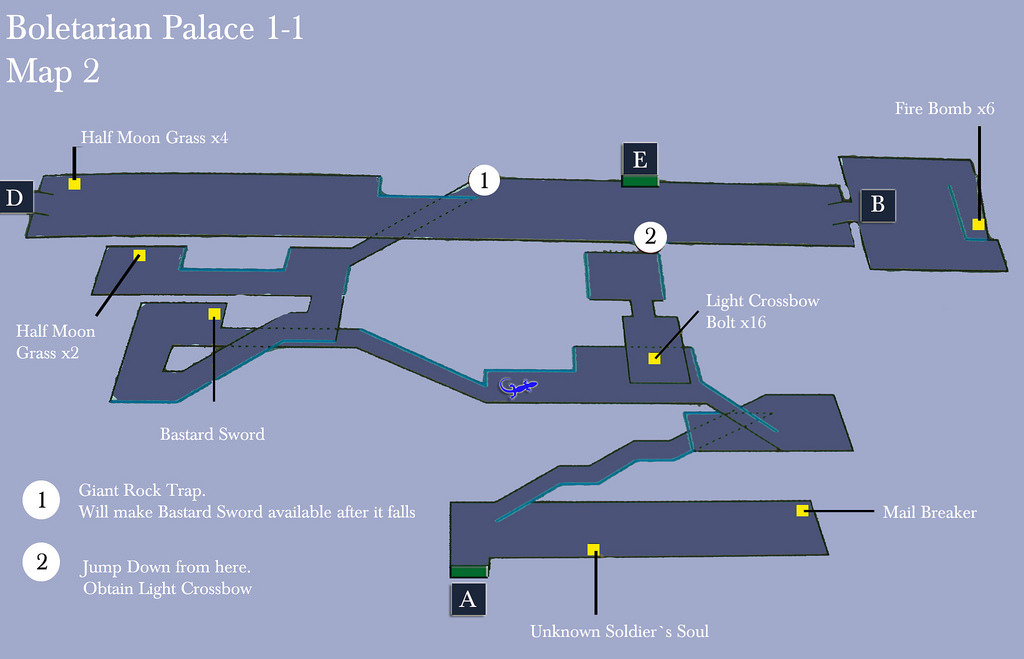 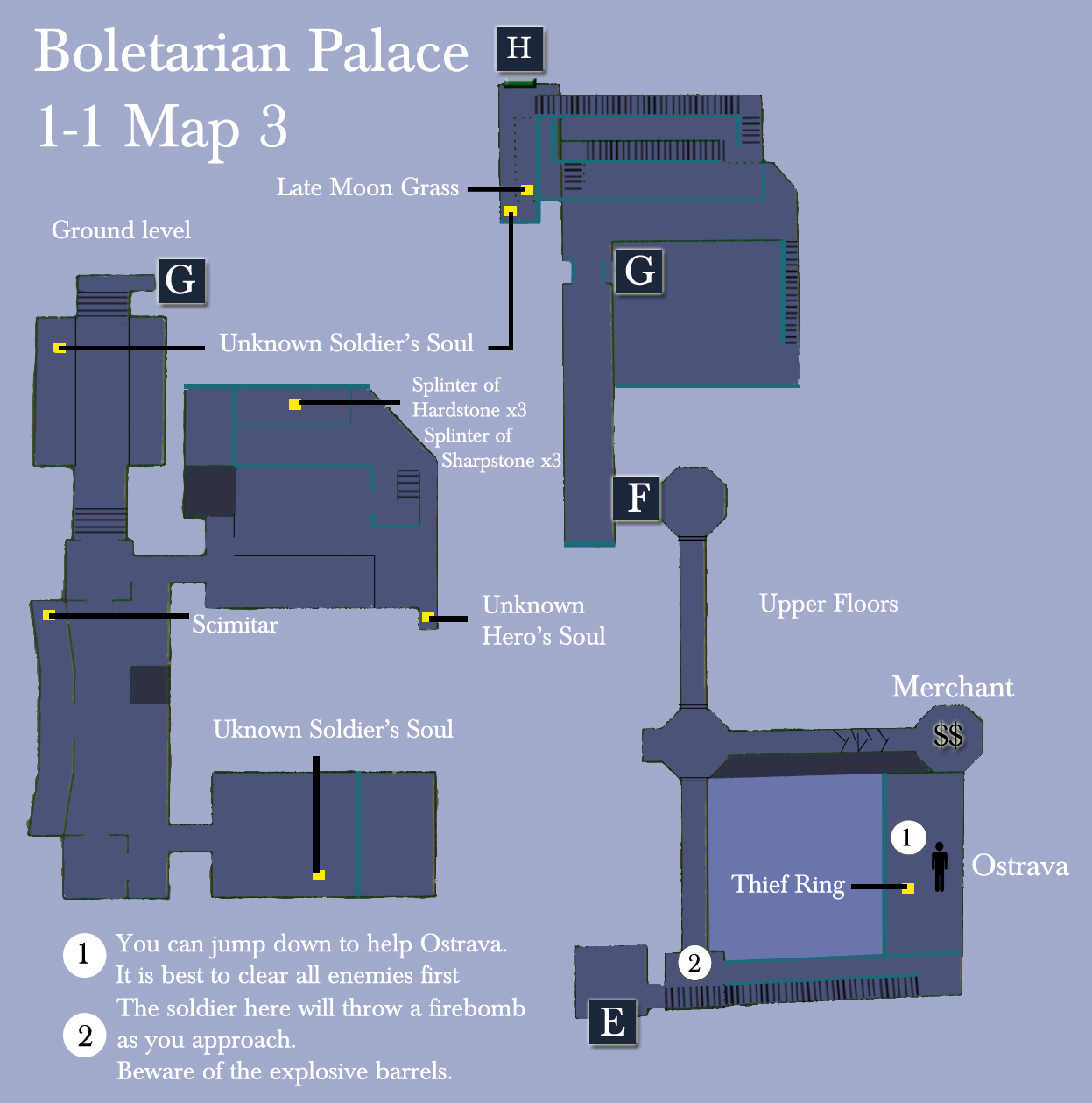 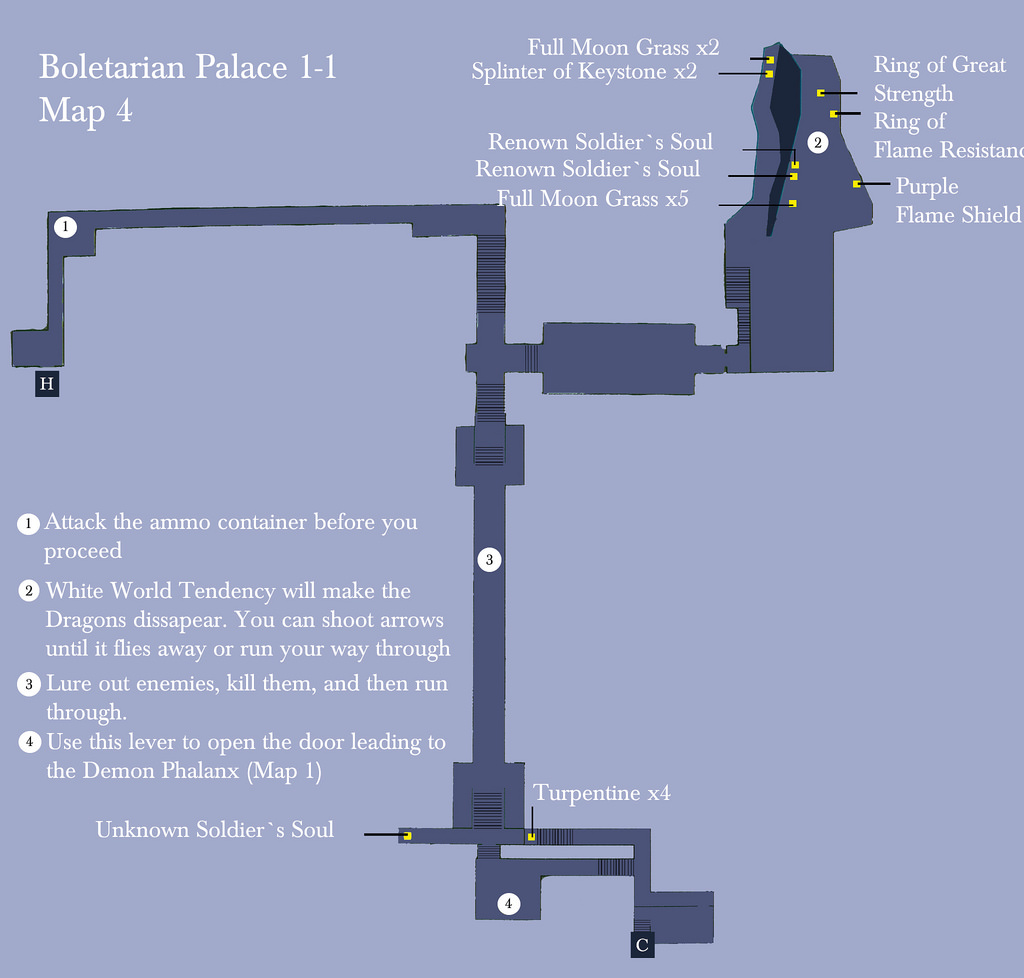 The Boletarian Palace is the first area you will have access to. After you defeat the first Demon, Phalanx, the Monumental in the Nexus will unlock all other archstones for you to enter all other worlds.

First, move forwards and up the stairs: you will soon notice that many crazed slaves attack you from behind impromptu barricades. Depending on your origin, you might want to keep your distance and use spells or be close up aggressive. To avoid taking too much damage, remember that you can block the attacks and parry, and learning to time this could be of great benefit to you. Use these slaves as practice enemies.

When you arrive at the closed giant door, you will see an open path to your left. There is another closed gate in front of you (marked as 3 in Map 1) that you will be able to open later on. For now, follow the narrow path and you will be attacked by a slave with a crossbow and two sword-wielding slaves. The strange "Black Hole" in the floor is lethal, so to clear this section you would do best to run straight towards the crossbow enemy, up the stairs of his platform and kill him, and then turn back to kill the slaves, if they have not fallen into the void.

Proceed into the structure and you will be ambushed from enemies taking advantage of the darkness. Keep your shield up at all times!

You will eventually come to point A and fight two enemies with firebombs. Behind them is the first fog of this level: touch it to move forward.

Now you must follow the path upwards whilst fighting some enemies. Most of them have firebombs so keep your shield up and roll forward to avoid being hit.

On the last set of stairs, marked as point 1 in Map 2, there is a soldier waiting for you to start upwards to make you live an Indiana Jones-like moment, by pushing a giant rock your way. Simply walk upwards and then run back down and out of the way to avoid it. Now you can also jump down the way the rock fell and obtain the BASTARD SWORD, then come back up to kill the guard who pushed the stone.

You are now at the top of the outer wall of the Palace. There are two paths, marked as D and B on Map 2. Ignore D, you will come back here later. Set towards B instead and meet your first Blue Knight.

This enemy has strong attacks, good stamina, and has Moon Grass that it will use to heal himself, so beware! The initial tactic would be to throw a firebomb at him and follow with a light attack, then roll out of his counter. He will pursue you if you run, so try to time an evasive roll as he attacks you to get behind him and perform a powerful backstab.

Once you have killed him, you can walk towards point 2 (Map 2) and jump down to get the LIGHT CROSSBOW and some bolts. You will then have to make your way back up to this point.

The second fog is behind where the Blue Knight was, but do not go through it yet. First, go towards point B (Map 2) and down the stairs. Keep your shield up, as you will be attacked by fire-blade enemies and there are explosive barrels around, so keep your shield up and use X to dash backward when you see an enemy slashing at you.

Proceed down the stairs until you find an opening in the wall leading to an outside alcove. This is point 2 in Map 1. You will see a set of chains, attack them and you will get some important items when you get to the bottom of the stairs.

Now go back into the structure and continue going down, always being careful of the slaves and explosive barrels. When you reach the bottom, you will find your first ring: the CLING RING. Equip it immediately if you are in Soul Form, as this ring will give you 25% more health. Now use the Lever and open the gate in front of you, marked as 3 in Map 1. You now have a shortcut to the second Fog.

Make sure to get the Jade Ornament from just outside the gate you have opened. You can show this to Stockpile Thomas back in the Nexus to obtain another important ring, the RING OF HERCUEAN STRENGTH.

Now that you have opened the shortcut, you can head back and go through the second Fog. You are now at point E of Map 3.

Go down the stairs and towards point 2. You will see some explosive barrels and a soldier inside the structure: as soon as he notices you, run back the way you came or you will be killed by the explosion generated from the firebomb he throws at you.

After the barrels are destroyed, you can proceed and kill him, and other 2 guards, then head towards exit F. You will be ambushed by more enemies and crossbow-soldiers. Take them out whilst remaining evasive. Then head upwards towards point H, killing the crossbow soldiers you encounter. Point H is the 3rd fog of this level and is defended by a Blue Knight. Kill the knight with a combination of evasion and quick parries/firebombs, but do not go through the fog yet.

Now backtrack down all the way to the ground level. Kill the many enemies that await you and then clear the way to point G by smashing the crates. Continue forward and defeat yet another Blue Knight, then go left to kill the enemies in the section that has the hardstone/sharpstone fragments. After you have killed them, continue towards the point where you will meet Ostrava. He will ask for your help in killing the soldiers, do it and he will come down and meander around the section.

After you have cleared all enemies, you can backtrack to the start point and jump down to where Ostrava was standing (Marked as point 1 in Map 3) to obtain the THIEF RING.

You are now ready to go through the third fog. You are now at point H of Map 4

Walk towards point 1 of Map 4, and attack the wooden structure. Doing this will free a number of giant rocks rolling towards the enemies that were ready to ambush you in this passage. You can now safely walk and collect items.

You will arrive at an intersection and be attacked by 2 spear-wielding soldiers. Divide and conquer is best for these foes, and remember to roll to evade their attack and then deal a quick counter. Once they are dead, you can go towards point 2 or point 3. At point 2, there are the King`s Dragons. One of them will breathe fire on the whole area, making it a daunting challenge to gather the items. You have the choices:

Whatever your choice above, you will eventually have to continue towards point 3. To survive this part, you must first lure out some of the enemies to the safe "intersection" where the two spear soldiers attacked you. Defeat the enemies here and lure out some more.

When you have ventured far enough into the bridge, the Red Dragon will come and breathe fire on it, killing most of the enemies (and you if you don`t dash back the way you came).

Observe the Dragon`s pattern and, when you see your window, rush towards point 4, ignoring all other enemies. Once you are behind the Dragon, you can turn around and kill the remaining soldiers.

Afterward, go to point 4 and use the Lever, that will open the door to the Demon Phalanx. After this, you can venture forth and kill some more enemies, and start descending a set of stairs whilst defeating "mini phalanx" enemies. Their weak spot is on the back, so keep your shield up, run towards them, and position yourself behind them to be able to kill them. When you reach the bottom, you will be at point C of Map 1. You can use the lever to open the gate, and see the final and 4th fog of this level. Go through the fog and confront Phalanx.

This demon has very low fire resistance, so use turpentine in your weapon and firebombs. During your first playthrough, it is best to keep a rythm of: shield up, roll, throw firemomb, run in a circle, attack with turpentine weapon.

You will slowly defeat the mini-phalanx sorrounding the real boss. Ignore the items they drop and continue attacking.

Once he is dead, you will get a "You are revived" message, which means you have your body back (hence your full health bar, you can unequip the "cling ring" now). Do not touch the archstone yet. Collect the items.