Character Tendency is specific for your character. Demon's Souls also features World Tendency, which is affected by the world. Each tendency acts on its own and doesn't rely on the other one.

What is Character Tendency in Demon's Souls?

The world of Demon's Souls has an absolute morality system that gives players a specific alignment: toward Black Tendency (Evil) or white tendency (Good). Not to be confused with World Tendency, the Character Tendency mechanic is specific to the player and the actions of the character throughout your playthrough. If you help other players and vanquish evil from the world, you will become purer and your tendency will become White. If you kill NPCs and invade other players as an evil phantom, you will become darker and your tendency will become Black. 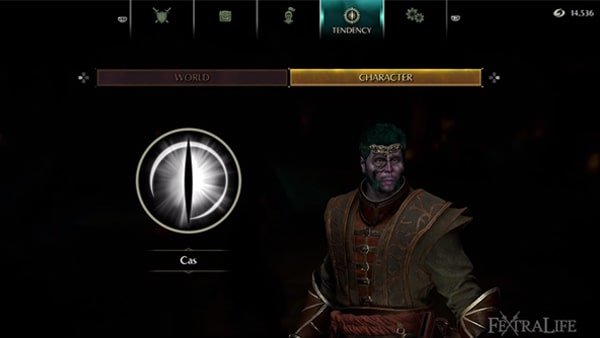 What are the effects of Character Tendency in Demon's Souls?

Note: Killing these 5 Black Phantom NPC in certain manner (details uncertain) will not trigger the shift in Character Tendency. Here are some tested examples:

Here's a list of NPCs that you can kill to shift the character tendency. Killing these will NOT lower your World Tendency or affect questlines.

Here's a list of NPCs that you can kill to shift the character tendency. Killing these will NOT lower your World Tendency but WILL affect questlines.

Kill 3 of the special named NPCs. Killing these will also move World Tendency -60% towards black.

Notes:
Killing the following Named Black Phantom NPCs has no impact (either way) on Character Tendency (both confirmed).

Character Tendency in Demon's Souls also influences your stats as a Black Phantom and in Soul Form. Listed in the table below, you'll find the following parameters that will influence the various stats for both Black and White Character Tendency.

Apart from affecting the parameters of the player's character, it also affects certain weapons in the game, depending on the spiritual standing of your character. Later in the game, you can find three Weapons that can be used to measure your CT, and these weapons are the Demonbrandt, Soulbrandt, and the Northern Regalia. These weapons can grant bonuses that are based on your current CT. You'll see the bonus values of the mentioned weapons that are listed in the table below.