Swamp of Sorrow (Also known as "5 - 2" or "Leechmonger Archstone" in Demon's Souls) is a Location in Demon's Souls and Demon's Souls Remake. This area features the Archstone of the Demon Leechmonger. The Valley of Defilement leads to a huge swamp into which all that is unclean flows, becoming a nest for putrilage, vermin, and plague. In this Leechmonger Archstone Walkthrough, we help you find all items and navigate the deadly and black-phantom infested swamp. The Swamp of Sorrow can be found in the Valley of Defilement. 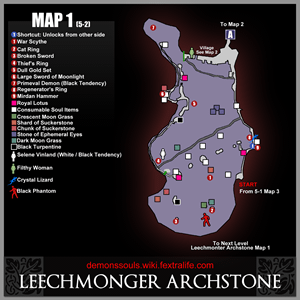 Selen Vinland will appear on a tiny island right after the first fog gate, talk to her to start a side quest. Pure White World Tendency required.

Give her the Crest of Vinland from 5-3 to get the Ring of Devout Prayer (Your faith has to be at least 10 for her to give you the ring). Drops the following if killed:

Black Phantom Giant Depraved Ones before the boss area, near the Shaman

A Primeval Demon is in the cave, where the boardwalk leads to a dead end on land, beside the second fog gate. 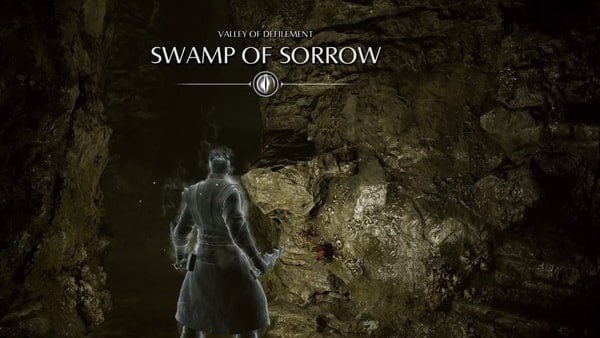 The Swamp of Sorrow in Demon's Souls Remake or better known as "World 5 - 2" in the original Demon's Souls becomes available after defeating the Leechmonger. You start from the Archstone and to along a marshy corridor, once it opens up, take the planks on your right, near the end you will find a Depraved One. 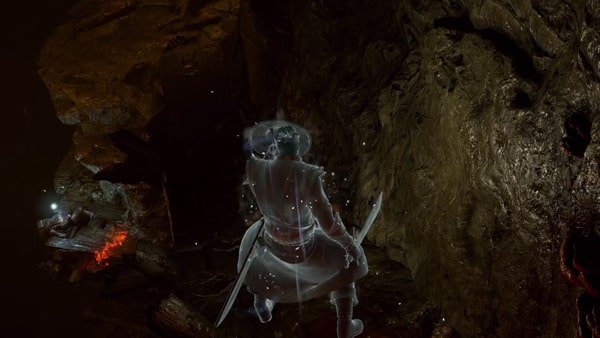 Now the level is a giant swamp with small "isles" you have to reach to fight Enemies or obtain loot, a powerful ranged weapon or spell works wonders here. Standing in the swamp will apply the Poisoned negative status effect to you. Turn right reach the end of the platform and turn left. Move forward to the next platform. 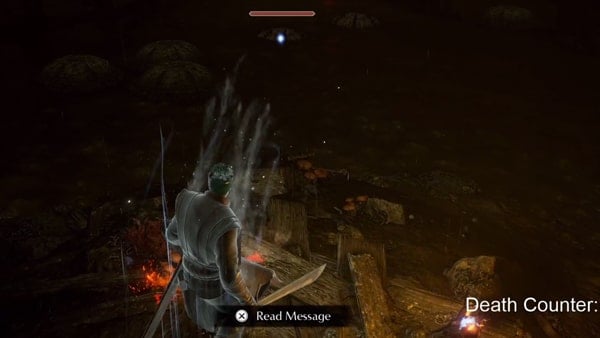 You will encounter and pretty much aggro a group of Poison Jellies, they are slow, so you can take them out from the island using ranged attacks. Once done, turn back and pass through the gap between the previous platform and the one next to it. 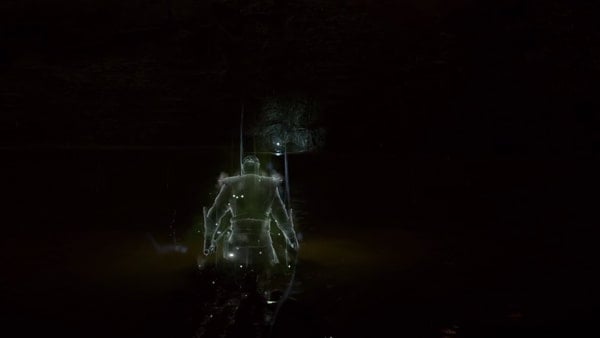 You will see a treasure far off the distance. Go to it to loot x1 Regenerator's Ring. It is incredibly useful in this area to minimize the effects of Poison - see Point 8 on Map 1.

Keep hugging the wall to the right to reach, the next treasure you can see in the distance. It is x1 Storied Hero Soul. You will notice more Poison Jellies getting to your position. Anytime this happens, stop to kill them, don't let them grow into a horde. 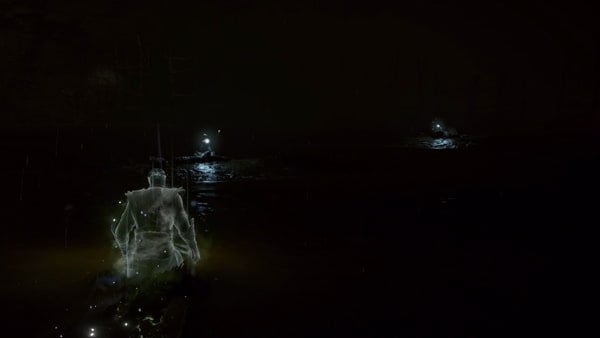 There is a platform that contains x1 Dark Moon Grass and x11 Crescent Moon Grass, you will find x1 Broken Sword a little bit further in the swamp. Another island contains x1 Suckerstone Shard and is next to one that has x1 War Scythe. You can find x1 Cat Ring on an island a little further to the right - see Point 1 and 2 on Map 1 for reference. 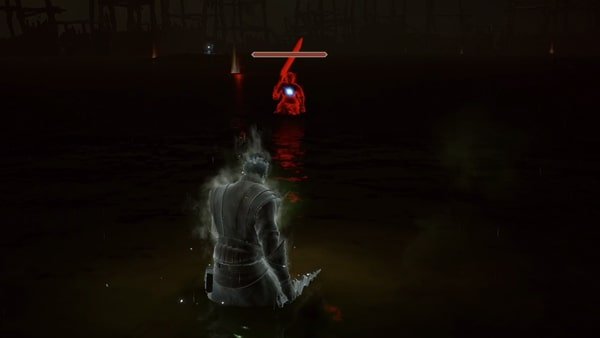 There is also a Meat Cleaver Black Phantom you'll encounter who's patrolling the swamp. Try not to fight her on water, because you are unable to roll once you are there. Defeating the black phantom drops x3 Faintstone Chunk and x2 Stone of Ephemeral Eyes. 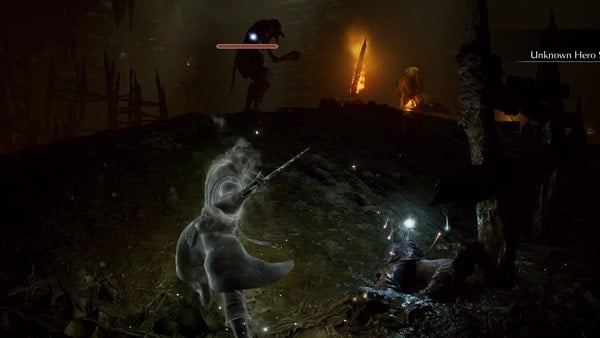 In front of you, you will find eight Poison Jellies, and to their left, there is a bigger island that is inhabited by four Depraved Ones and one Giant Depraved One. You can loot x3 Noble's Lotus and x1 Unknown Hero Soul. Take the plank bridge at the end of the island, it will lead you to a fog door. Go through it. Keep advancing to face two Giant Mosquitoes and a Depraved One at the end of the plank.

Through the Fog Door: Selen Vinland 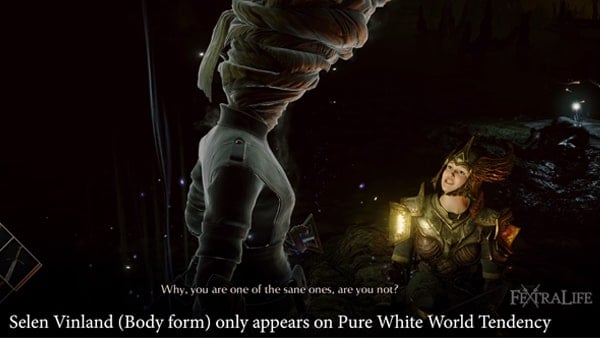 If you drop to your right and keep going you will find Selen Vinland. Talk to her, and she will ask about her younger brother Garl Vinland if you are in Pure White World Tendency. In Pure Black World Tendency, she will appear as a Black Phantom and attack you. She drops x1 Blind. There's a body containing x1 Thief Ring on her island. Further in, there's a small island that contains x1 Dark Moon Grass.

Keep going forward to face three Giant Mosquitoes. After them, there are three Depraved Ones further in. On your left side, there's a hole from where Depraved Ones, will drop on you. There are two more Depraved Ones at the end of the plank. Along the rampart, you'll also find a body that you can loot to find x1 Grass Jelly. Drop down on the next platform. 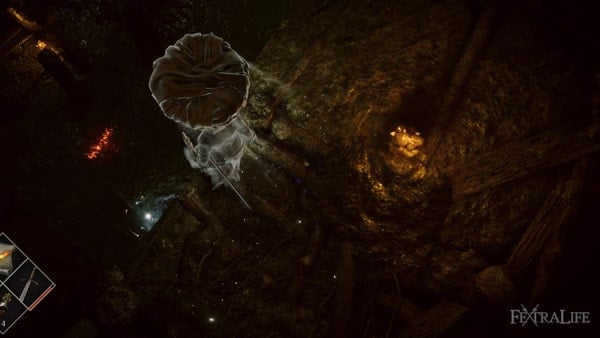 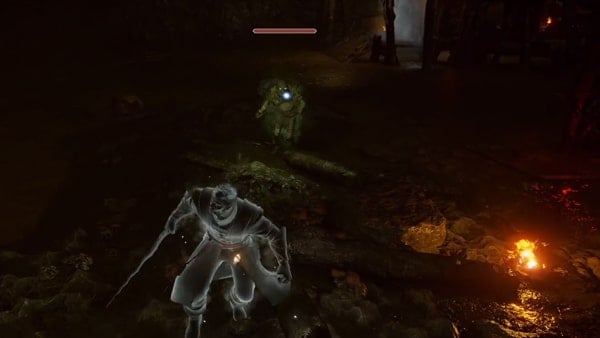 Head back to the previous island. Turn left and move forward. You will find two Giant Depraved Ones and a Depraved One Shaman. After them, keep going and advance through the fog door on your right. 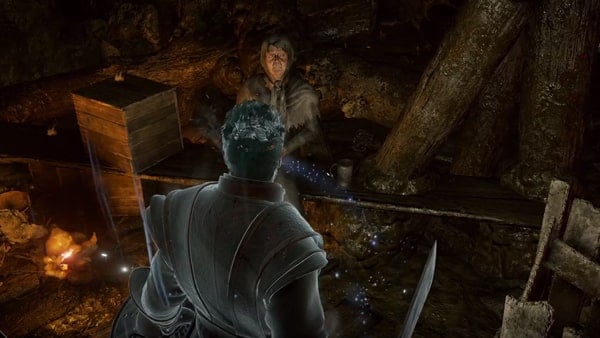 A few meters ahead, to your left, you will find the Filthy Woman, see Starting Point on Map 2. Just behind her, on the swamp-level, you will find a corpse containing x3 Late Moon Grass. You can see a Depraved One on the little platform ahead of you. You can kill it using a ranged attack.

Keep going once you reach the end turn right, and go through the planks platform. You will be attacked by 2 Giant Mosquitoes. Advance until you find a body, loot it to obtain x1 Unknown Warrior Soul. You will find two more Giant Mosquitoes. 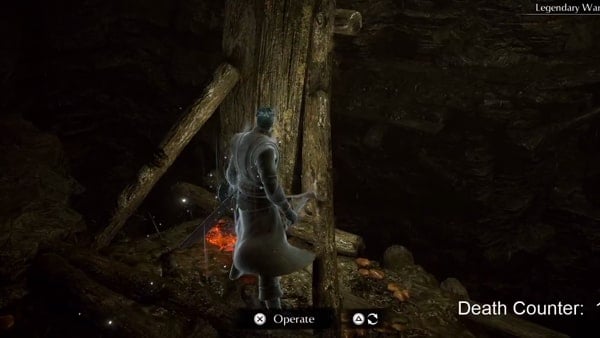 Keep going to face a Depraved One and a Giant Mosquito, continue until the platform goes a little higher, climb up. Continue forward, the area will widen. There are 2 Depraved Ones and a Crystal Lizard. A little bit further in, you can loot a body to obtain  x1 Legendary Warrior Soul. 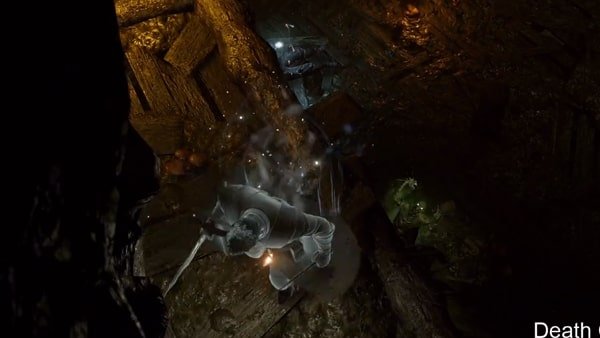 There's a vertical wooden plank that you can lower to use as a shortcut, that leads to the beginning of the area. If you drop down to your left you will be able to loot x1 Mirdan Hammer. Also, there's a lonely Depraved One Shaman, if killed you can grab from him x1 Shaman's Clothes, x1 Shaman's Armband, and x1 Shaman's Tabi. 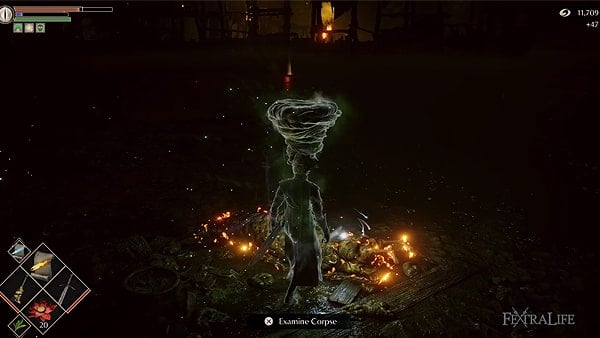 Return to the entrance of the second fog door, there's a treasure in the distance. Go towards it,  there are four Giant Mosquitoes. Defeat them, and keep going to loot x1 Storied Warrior Soul on the island. Check the east side and head down into the poison. If you go straight, you'll find a small island that has x1 Phosphorescent Slug and a body that you can loot to find set pieces for the Dull Gold Set. Video Location: Shown in our walkthrough video N11 at 24:40. Click here to watch it. 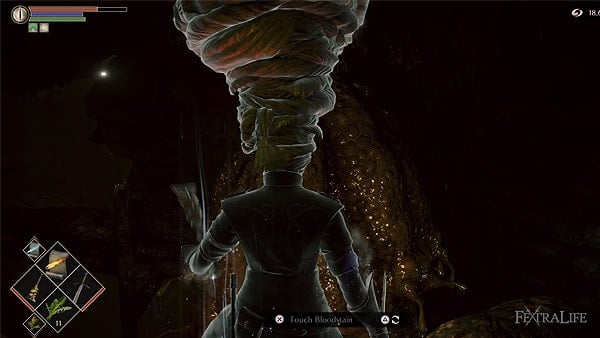 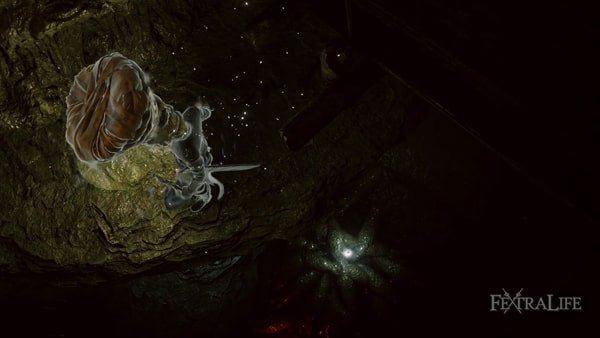 Drop down to your right to two platforms to find another lootable body, this one contains x1 Unknown Hero Soul.  If you go down all the way to where the Phosphorescent Slugs fell, be ready to fight them. You will see a sword between them. Loot it to obtain x1 Large Sword of Moonlight. Near the sword, you'll also find a corpse that you can loot to find x1 Suckerstone Chunk.

Return to where the second fog door was, and go through the building until you reach the last floor. Turn back and kill the Depraved Ones on your right. You can loot x1 Storied Hero Soul on your left and x1 Unknown Hero Soul. 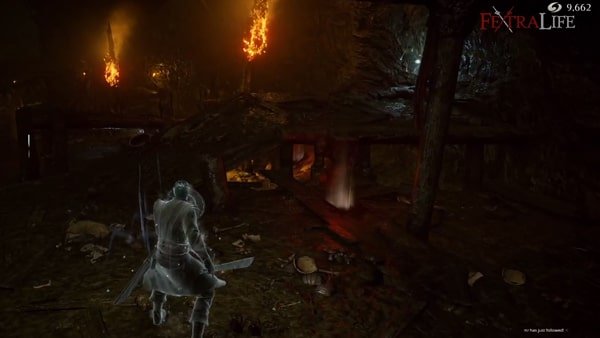 Further, there is a Depraved One, behind it there's another lootable corpse that contains x1 Shotel. Two Depraved Ones will drop from above. Turn back and head forward until you find a path that's on your left, take it and you will be in front of a fog door. Go through it to face the Dirty Colossus. 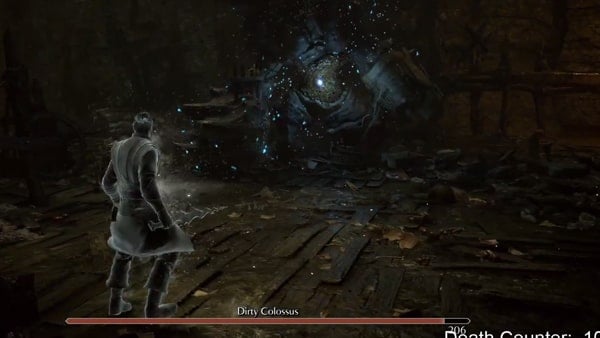 The Dirty Colossus is a deformed creature that arose from the compounded filth that accumulated in the Valley of Defilement. It has a golem-like figure with a spiky red carapace that is covered in brown slime and wooden planks. Its sensitive abdomen is protected by a shabby wooden barrel. A cloud of flies is constantly buzzing around its head. A fat maggot-like growth covered in stitches sprouts from Dirty Colossus's left shoulder.

To learn more about the strategies on how to defeat this boss, you can check the video guide below or visit the Dirty Colossus page. Once you've defeated the boss, the Diry Colossus Archstone will appear. Touch it to obtain x1 Eroded Demon Soul and to end the area. 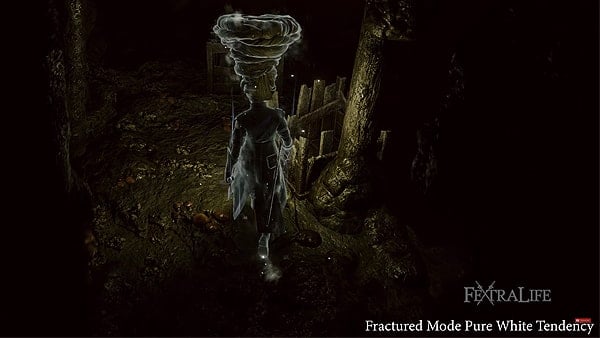 You'll be able to find two Ceramic Coins in this area but it requires the player to have Pure White World Tendency and Pure Black World Tendency in Fractured Mode. To find the one in PWWT, follow the scaffolding path after the fog door upwards until the end where you can start dropping down. Drop down once and look toward the wall, then drop on the narrow edge between wall and platform. You will fall onto a ledge with a crate, break the crate. *This coin can bug out and not appear. Just reload the world and run there again. Video Location: Shown in our walkthrough video at 7:15. Click here to watch it. 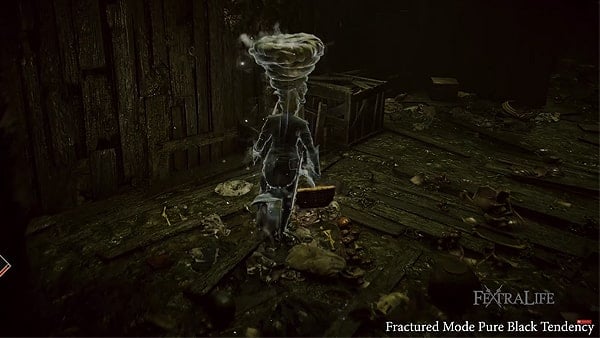 As for the second coin, you need to have Pure Black World Tendency in Fractured Mode. You can find it in the shantytown area before the Dirty Colossus Boss Fight, break boxes in the area before the fog gate. Video Location: Shown in our walkthrough video at 13:24. Click here to watch it. 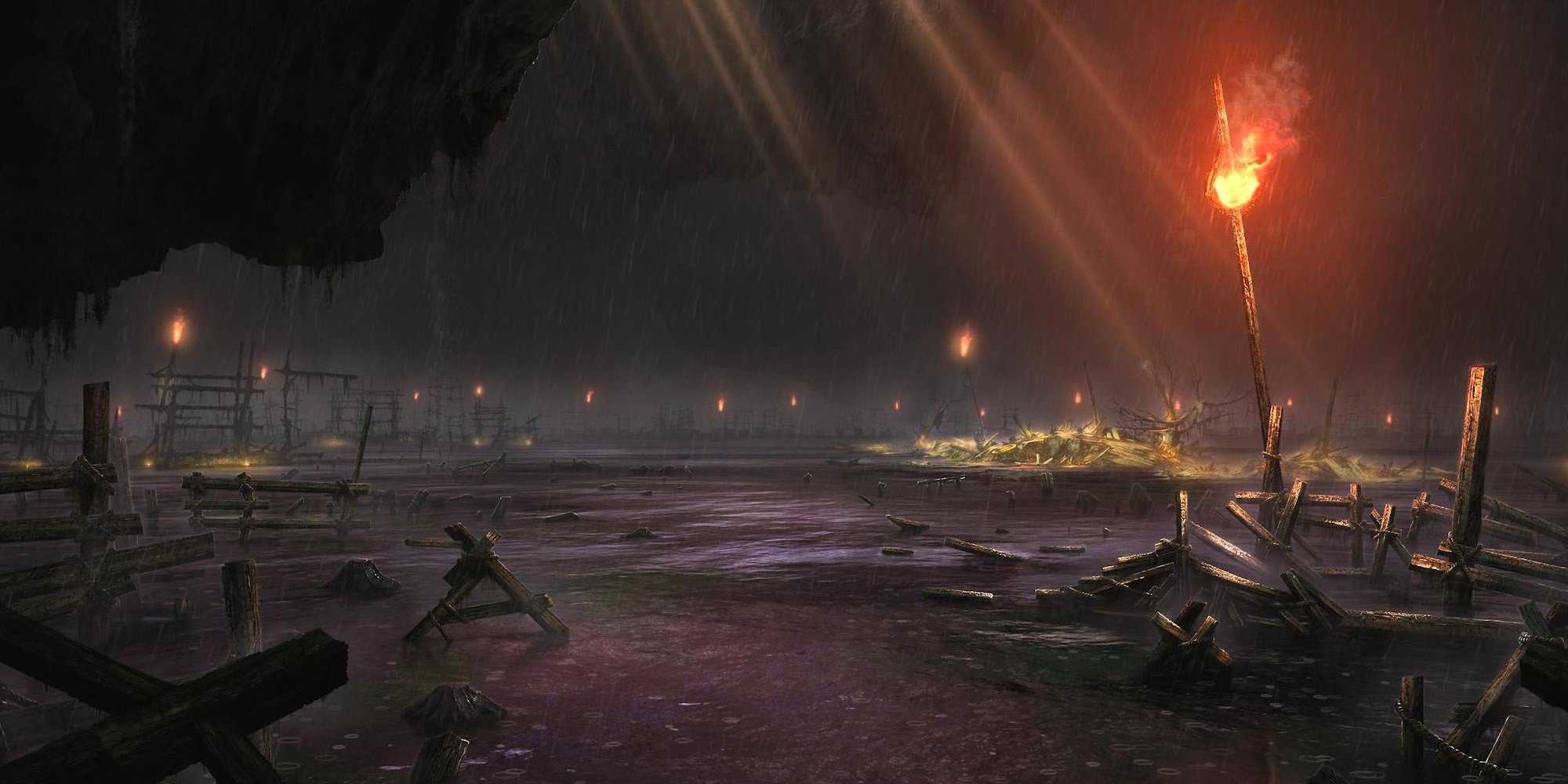