Blue Dragon is a Boss in Demon's Souls. Bosses are special enemies that feature their own arena, a large and prominent health bar with its name indicated, a variety of unique moves and abilities, an ambient boss theme, and an Archstone that appears upon their death. Most bosses appear once the player passes through a fog gate nearby.

This boss is optional.
World 1-1 (Boletarian Palace or "Gates of Boletaria") 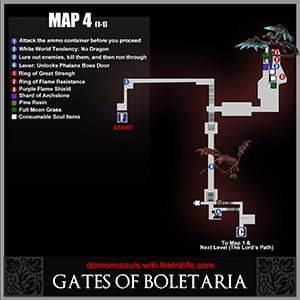 The Blue Dragon will stand on a broken tower and breathe fire from there.
Wolrd 1-4 Penetrator Archstone (The King's Tower)

The first time you encounter the Blue Dragon is in the dragon's roost in 1-1, here it merely serves as an environmental hazard and it can not be killed. It will on the other hand leave its post, and fly towards the King's tower when its health gets down to about 10%.

If Biorr is alive he'll try to help you here. He really just gets roasted about 100 times, taking 13 damage each time. You'll likely get hit trying to get up these stairs at least once on the first several tries. With that in mind, try using some appropriate spells or miracles. Second Chance is great if you have it, since it lets you immediately resume running. Otherwise, Water Veil and the Ring of Flame Resistance are recommended. Keep some Full Moon Grass selected if he doesn't kill you in one hit, which he shouldn't with these precautions.

Once past the fire, you'll be directly beneath him. Try killing him with ranged attacks. He isn't resistant to fire. For instance, try using Fire Spray and Fresh Spice to take him down (with Insanity Catalyst and Ring of Magical Sharpness). If you don't have these, hit him with some more poison or plague and let him fall apart that way. Biorr can survive for a long while, and he won't help you anymore after this encounter, so don't worry too much about him. Just add on some damage. As a reward, you get safe access to some Legendary Hero Souls from the dead corpses on the stairs.

It's also possible to stand just inside the doorway and lock on to the dragon's head, which can be seen moving back and forth above. Just keep locked on, and keep pumping arrows into it. For maximum efficiency, watch its movements: When it does a slightly wider look to the right, it'll dodge one arrow, so start firing just as the head looks back left. With the Lava Bow and 25 DEX, you can pump five arrows into it before taking a quick pause, and repeat until it's dead.

In either encounter, if you want to save on arrows and spices, this is a good time to use any Throwing Knives you may have acquired. The damage will be minimal and as such it will take longer to kill him, but it could save you on resources. Using Kunai to poison him is also very effective. usually takes between 15-25 kunai.

Biorr/Ring of the Accursed strategy

Notes, tips, and trivia of the boss go here.