Penetrator is a Boss in Demon's Souls and Demon's Souls Remake. Bosses are special enemies that feature their own arena, a large and prominent health bar with its name indicated, a variety of unique moves and abilities, an ambient boss theme, and an Archstone that appears upon their death. Most bosses appear once the player passes through a fog gate nearby.

Penetrator can be found at The Main Plaza behind the barricades.
World 1-3 (Tower Knight Archstone or Inner Ward) 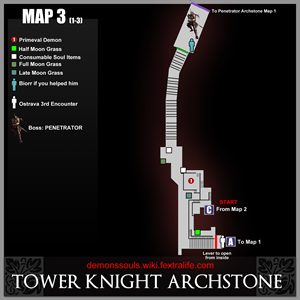 Knight-like demon, the Penetrator wields a long Penetrating Sword that glows light blue during every blow. It can perform a devastating thrust attack, but it's rather slow as the rest of his offensive maneuvers.