Maiden Astraea is a Boss in Demon's Souls and Demon's Souls Remake. Bosses are special enemies that feature their own arena, a large and prominent health bar with its name indicated, a variety of unique moves and abilities, an ambient boss theme, and an Archstone that appears upon their death. Most bosses appear once the player passes through a fog gate nearby.

Get down using the second ladder. Keep going until you reach the fog door. Maiden Astraea is behind the door.
World 5-3 (Dirty Colossus Archstone) 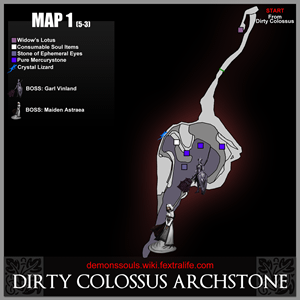 She is a tall, blonde lady who works to help the plague-stricken and disease affected inhabitants of the Valley of Defilement. When players find her, she is perched on a rock, blood, swamp water and plague staining her skirt and helpless. Her bodyguard, Garl Vinland, is her only form of offense and defense.