Old Hero is a Boss in Demon's Souls and Demon's Souls Remake. Bosses are special enemies that feature their own arena, a large and prominent health bar with its name indicated, a variety of unique moves and abilities, an ambient boss theme, and an Archstone that appears upon their death. Most bosses appear once the player passes through a fog gate nearby.

After the narrow cave, take the stairs up. Enter the fog door at the top to enter the boss area.
World 4-2 (Adjudicator Archstone) 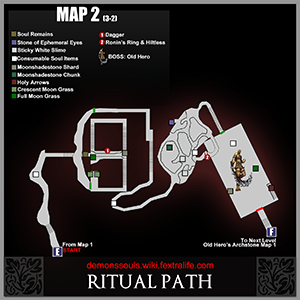 A towering hero of legend brought to life by the Old One. It wields a massive curved sword made of quartz crystal. The Hero is blind, with his eyes either being covered or removed entirely. As a result, he has difficulty searching for his opponent and can be seen feeling around with his left hand during the fight. Like the Adjudicator and the shadow man on the Archstone, the Old Hero does not have lips.