Tower Knight is a Boss in Demon's Souls and Demon's Souls Remake. Tower Knight is an iconic boss of Demon's Souls that acts as a skill check for progression into the harder areas of Boletarian Palace. Bosses are special enemies that feature their own arena, a large and prominent health bar with its name indicated, a variety of unique moves and abilities, an ambient boss theme, and an Archstone that appears upon their death. Most bosses appear once the player passes through a fog gate nearby.

Tower Knight is encountered in a large courtyard at the end of the second section (1-2) of the Boletarian Palace. This area is known as "Phalanx Archstone" or "The Lord's Pass" in the 2020 remake.

To access the boss, players will have to complete a run through dragonfire, dodge crossbow bolts, and engage a large pack of Dogs. A final sprint through the drakefire and the defeat of some Blue-Eyed knights is needed before accessing the fog. The area has several interesting secrets, so make sure to check out the walkthrough as well. 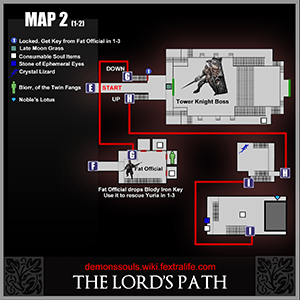 Sprint to get behind him and target the Knight's ankles. Be careful as he will use his shield and do a large area hit all around him. Keep circling around the back of him if you can with your own shield up. As long as you remain behind him, only his back step and leap back can damage you. These are his weakest attacks. Eventually, after enough damage is done, he will fall over and you can attack his head for massive damage. Either run forward through his legs, or to the side to avoid having him fall on of you.

Alternate Melee strategy - staircase shuffle Using this method will take a long time but it's quite safe and simple.

Once you've killed all the archers head up either of the large staircases. When you see the Knight ready to throw his lance. Sprint down the stairs towards him and slash at his exposed foot. Then run back up the stairs again. You won't do a lot of damage but you shouldn't get hit either. The trick is to try and get him to move close to the bottom of the stairs so when he goes to throw his lance and you run down the stairs you'll hit him in his body and do greater damage. He will jump back every so often, so you'll need to move up and down the stairs to goad him forward. Occasionally he will move himself towards the other staircase. In which case run across to the other staircase and repeat as above.

Note: In NG+ and further, having a Dragon Sword +3 or a Magic weapon such as the Large Sword of Moonlight makes this method preferable since the Tower Knight normally doesn't have time to retaliate effectively and requires a lot less baiting. You can attack at least twice with larger weapons and more for smaller weapons and then either retreat up the same staircase or if more convenient, the other staircase and loop back around or use the same strategy from this staircase.

Stay on the walls, go to the archway above the entrance. Attack the Tower Knight from here, using the stairs and railing for protection. He will use his spear to do a ranged attack, and when he does this move to shelter behind the railing. Then step out and prepare your attack. Release the attack the moment he moves his shield away to start his ranged attack power-up, then sidestep behind the railing for protection, and repeat.

Note that you should be close enough to the railing to allow you to fire over it, but far enough back so that all of his attacks hit the railing not you. There is no need to leave Soul Form if you are wearing the Cling Ring.

Another good position to attack from a distance, is from the side, on the railing, close to the entrance, where the railing is the lowest. You can walk up to where the archer was, and when he tries to throw his spear, you fire at him. A magic attack is faster than his spear throwing, so you have time to move aside safely. After the spear hits the wall, repeat the process.
On each side of the arena, walls are three small stairs with an archer on each of them. After you take out the archers, you can stay on the first stair on the right wall (as seen from the entrance), during the whole fight without getting hit once. Probably you are safe on the other stairs as well.

You can also aim at his feet with Arrow/Magic and it will make them "spray" just like if you were hitting them melee. Doing this enough times will also make him fall and you can attack his head with magic or jump down and bash his head in. Enchanting your weapon will do the largest amounts of damage.

If you want to save a few Arrows or Spices, this is a good time to use any of the Throwing Knives you may have gathered. The Knives will only do 10 damage each when thrown at his head, but accumulated this can save Arrows and/or Spices. However, the damage itself is minimal, and throwing them can be time-consuming.

Since in NG+ Firebombs are close to useless in Boletarian Palace, these can be thrown using the same method since they fall short and hit the Tower Knight's feet and have a chance of releasing some gas.

Tower Knight is weak to both Poison Cloud and Death Cloud and can be taken out easily with either, even if it takes some time. Death Cloud will paralyze the Tower Knight and after a few hits, you can simply walk up and swing away.

After killing the archers on the walls, get behind Tower Knight, lock-on to his head, hold down R1. Since you can keep moving while firing you can easily stay behind him and avoid all his attacks. Some attacks will hit his head doing extra damage, some will only hit his chest.

Tower Knight is very weak to Soul Arrow and can be taken out with just a few of them. First, go around and kill all the archers, then just lock on to the Tower Knight and strafe around him (being sure to dodge his forward shield bash), continue dodging, and strike him with the Soul Arrow when he has left himself exposed. Also, you can aim at his head to do maximum damage turning this into a relatively quick battle.

A large knight covered in thick metal armor, wielding a lance and a shield. It towers over the player, with the player character coming to just below its knee.

First, sprint past the Tower Knight up the stairs on the left or the right, and continue all the way around and kill all of the Crossbow men which line the walls on both sides of the courtyard, then pick a method of attack as follows.