Maneater is a Boss in Demon's Souls and Demon's Souls Remake. Bosses are special enemies that feature their own arena, a large and prominent health bar with its name indicated, a variety of unique moves and abilities, an ambient boss theme, and an Archstone that appears upon their death. Most bosses appear once the player passes through a fog gate nearby.

Maneater is found at the end of the stairs, behind fog door.
World 3-2 (Fool's Idol Archstone or Upper Latria) 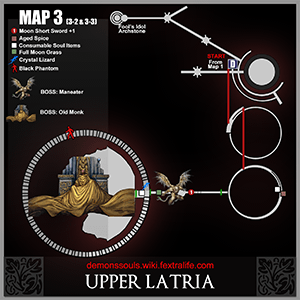 Twin demons who reside high above the Fool's Idol Archstone. They are chimaera-like beasts in appearance, with the body of a beast, bat wings, a serpent in place of a tail, and a vaguely human head with luminous green eyes. Based upon speculation, they are products of the Old Monk's experiments on prisoners of Latria, as he attempted to create demons of his own. The Maneaters can scream sonic projectiles and are adept in melee combat. The serpent affixed to a Maneater's back can spew magic as a ranged attack, and at times, it will bite into the Maneater hosting it, thus imbuing the monster with magic energy.

When equipped with the Thief's Ring or using Cloak, the Maneater can lose track of you and end up going into a loop of flying, landing, and taking off again. In the worst-case scenario, he will disappear. Additionally, if you strike the Maneater while he is using his power boost such that he falls off the edge, this may also cause him to disappear.
Another funny little glitch that can work to your great advantage is that he'll fly just above your head and use his snake-tail to spit out soul arrows, or whatever they are supposed to be. This means you can hit him very easily with a high vertical slash and ultimately kill him without being hit once. It works as long as he's hovering above you.