Fool's Idol is a Boss in Demon's Souls and Demon's Souls Remake. Bosses are special enemies that feature their own arena, a large and prominent health bar with its name indicated, a variety of unique moves and abilities, an ambient boss theme, and an Archstone that appears upon their death. Most bosses appear once the player passes through a fog gate nearby.

Fool's Idol is found behind a big door.
World 3-1 (Tower of Latria or Prison of Hope) 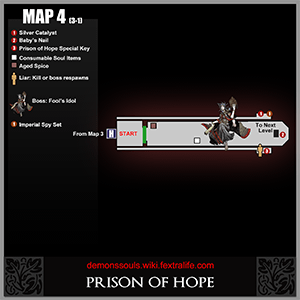 Before taking on the Fool's Idol, deal with the Prisoner that is above the church, where you find the Special Key. If you don't he will keep reviving her, rendering the battle endless.

If you watch the ground, you will notice symbols appearing and disappearing near the beginning of the fight. If you step on them, you will be stunned for a few seconds, allowing the boss to stun you with magic. You could memorize where they are, or you could just stay on the edges of the level where it's safe. Staying on the edges also lets you take cover behind the pillars to avoid her magic while healing up. You can jump in and out of cover using magic and/or arrows if you want to play it safe, but if you are feeling brave, 2-handing weapons work wonders to finish the fight quickly, just watch out for the stun traps.

If you decide not to kill all the harmless prisoners, you can use them for two purposes. They wander the floor and activate the invisible stun circles, relieving you the hassle of memorizing where they are. What's even better is that they only worship the real form of the boss, not her clones. When she starts creating clones of herself, pay close attention to the prisoners. They will always turn and raise their arms in praise in the direction of the boss. This is handy when doing sneak attacks.

As you beat on her, she will make clones of herself… The clones will fire small spells at you, while the real one fires the larger Soul Ray spell. Don't worry too much about if you are hitting the real one or not, as the clones will just disappear after you hit them a few times. You can always hit the obvious clones twice and wait for them to disappear if you don't want to get hit when they are in proximity to one another. Whenever you hit the real one, she will vanish in a ball of gold sparkles and reposition herself and her clones. You will know you're hitting a clone if they have a health bar - the true copy doesn't as she uses the bar at the bottom of the screen. Any easy way to exploit this is to R3 lock on. The clones will have a health bar, but when the real one is targeted nothing shows up. This can save time and give you a bit of breathing room as you don't have to get so close or use items.
The lock on method also allows you an easy route to gain the Not Fooled trophy which states 'Vanquish the Fool's Idol without hitting any clones.' Just make sure to take your time and not jump into an attack before establishing what does or doesn't have a health bar.

Melee players will have to resort to a bit of crossbow work I'm afraid, to flush her into a location which is easier for you to make lunges from. She sometimes teleports into the middle so wait behind a pillar for her to fire off some magic, then dash in and get a strong attack in until she teleports away again.

Fool's Idol is a Boss in Demon Souls. It will revive after being killed (As long as you leave the boss fog) and you cannot progress until it is killed for good. To do so kill the reviver in a small room up above, accessible by walking up the tower to the left of the ballista machine (When facing the machine).