Note: Biorr can be hostile, against the player, while he is fighting the dragon (it is not known if this is a feature or a bug). Pure Black World Tendency required 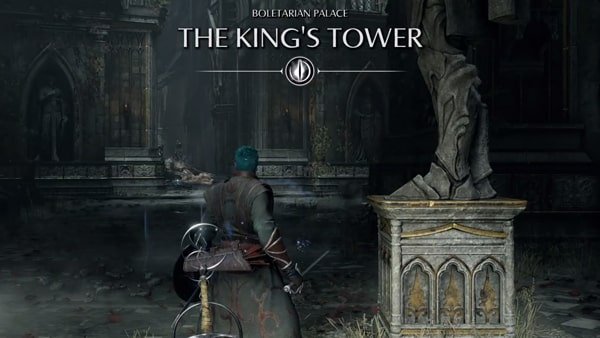 The King's Tower or better known as World 1-4 in the original Demon's Souls can only be accessed after defeating the Penetrator. Once you start the level, you will be encounter three Boletaria Soldiers wielding crossbows standing on a carcass of a dragon, straight ahead. Right before the carcass, you can loot two bodies that obtain x1 Storied Warrior Soul each. Before the fight, there's a Crystal Lizard. 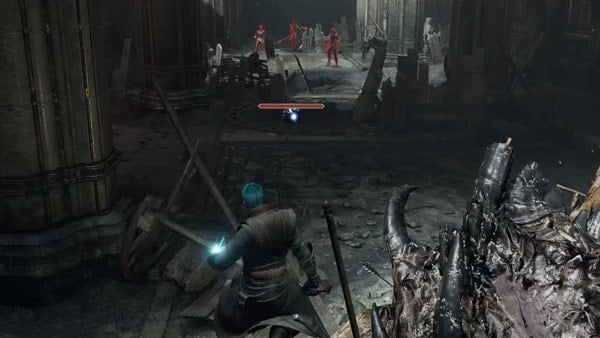 After this fight, you will find three Black Phantoms. Metas, Knight of the Lance; Alfred, Knight of the Tower and finally Long Bow Oolan. Try to take them one by one, black phantoms are extremely powerful and can kill you in a few hits - you can obtain x1 Penetrating Sword from Metas, x1 Tower Shield from Alfred, and x1 White Bow from Oolan. 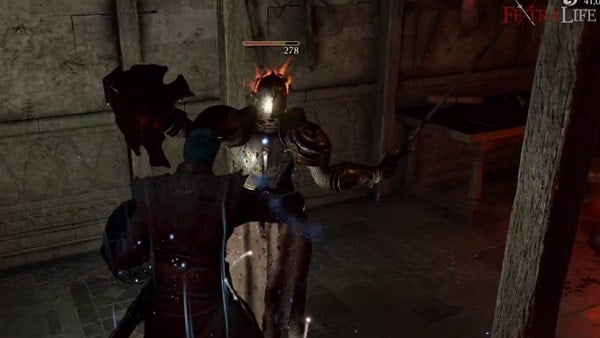 At the end of the room, head left, you will find x1 Stone of Ephemeral Eyes. Turn back and now head to the right. You will find another Crystal Lizard. Now go through the hole in the wall on the left, you will stumble upon a Red Eye Knight. There are also Boletaria Soldiers shooting you from an upper platform, so beware of the arrows. Turn right and go up the stairs. 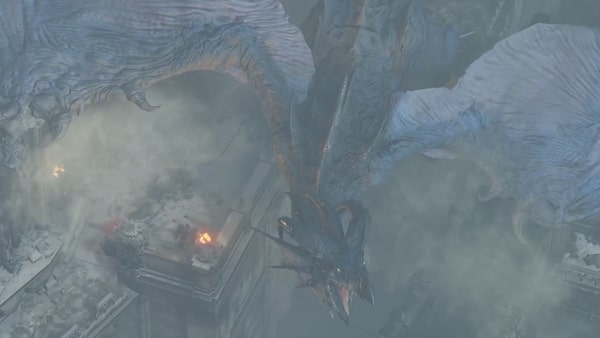 Drop on the platform to face two Boletaria Soldiers and an Imperial Spy. Now resume going up through the stairs, at the end, you will find another Red Eye Knight. Once at the top, turn left first and climb up the ladder. You'll find a body resting against the wall on the left which you can loot to find x1 Blue-Eye Knight Greaves. After grabbing the item, climb back down and head outside. You will be treated to a short cutscene. 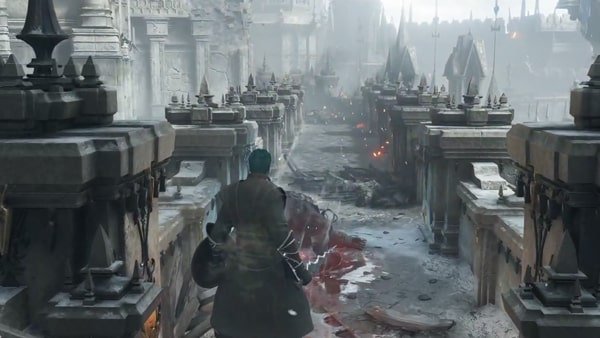 The Blue Dragon will stand on a broken tower and breathe fire from there. It will probably kill the Fat Officials trying to get to you. You can't fight the dragon there, at the moment he finishes spitting fire, run towards the other side of the bridge. 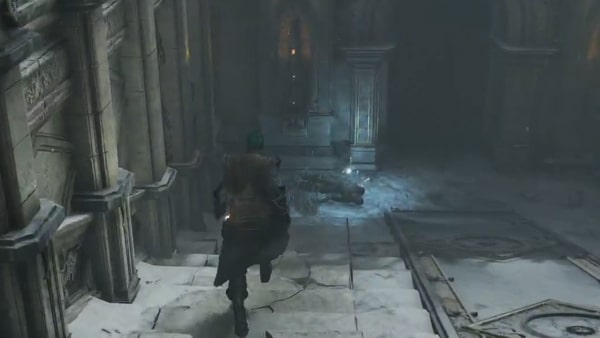 You will find another Crystal Lizard inside that room. Head up the stairs,  the Blue Dragon will change position, and move to the top of the big staircase. Head to the big stairs, turn right and when you reach the first little column, turn left and move towards the other side. Then turn left and keep going until you reach a crumbled side of the building. Drop from there to find x1 Knight Sword and x1 Knight's Shield. 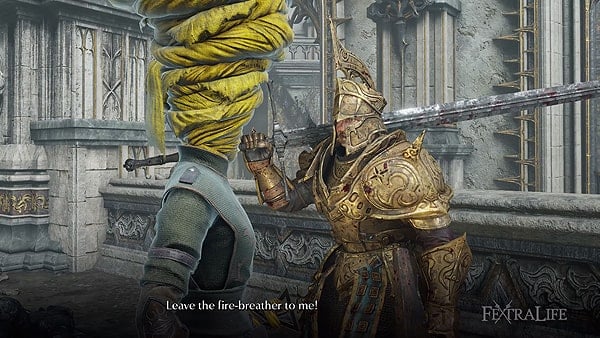 Turn left, you will find Biorr, of the Twin Fangs there if you rescued him previously in The Lord's Path and survived the Penetrator boss fight. The Blue Dragon sprays fire from left to right and then from right to left, so keep that in mind when you are going up.

To pass you will have to sprint the whole staircase. It is recommended to use Second Chance or Water Veil if you have already learned them. Flame Resistance Ring and any armor that protects you from the fire would help you a lot. There are two lootable bodies that contain  x1 Legendary Hero Soul each. You can take up on the dragon from here. 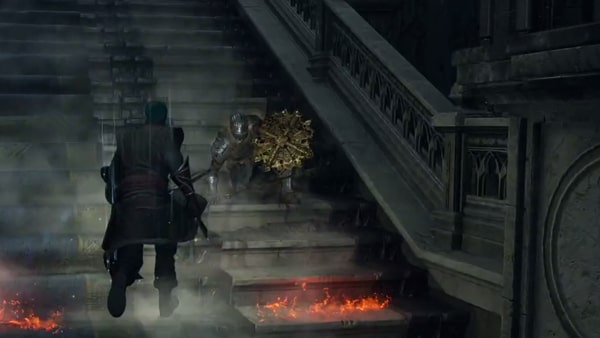 If you defeat the Blue Dragon, it drops x1 Large Scaled Flame Demon Soul. Now head to the hall, directly under where the dragon was. If you saved him before, you will find Ostrava, of Boletaria by the steps. He tells you his father is up above and he has transformed into a fiendish demon. He asks you to kill his father and gives you  x1 Mausoleum Key that allows you to access the Boletaria Mausoleum. 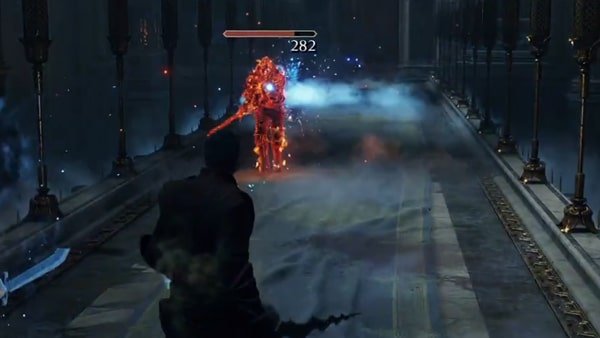 After that, keep going up and in the long walkway, you will be approached by Black Phantom Ostrava. Once defeated, you can loot his body to obtain x1 Rune Sword and x1 Rune Shield.  Now turn back and head to one of the little balconies, behind you to obtain x1 Stone of Ephemeral Eyes. Return to where you just fought Ostrava's Black Phantom and head forward, you will enter an elevator. Activate it to go up, straight to a fog door. Enter it - a short cutscene will play, and you will be facing Old King Allant. 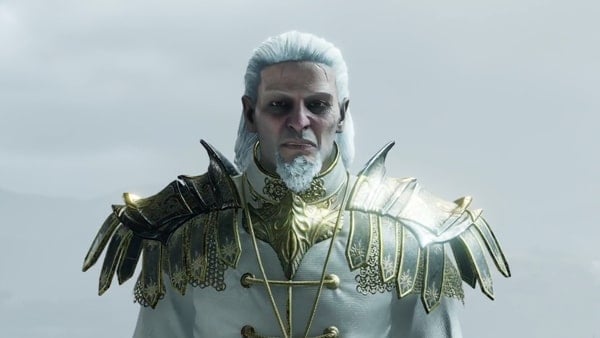 Allant, driven by a lust for power, became a demon after he made a pact with The Old One. This boss is known as the 'False King' because it is not the REAL Allant. After Allant allied with the Old One, he was given immense power. Using this power, he fashioned a demon made in his own image, made to look like his old self at the height of his power. This demon would lead the demon armies against Boletaria. 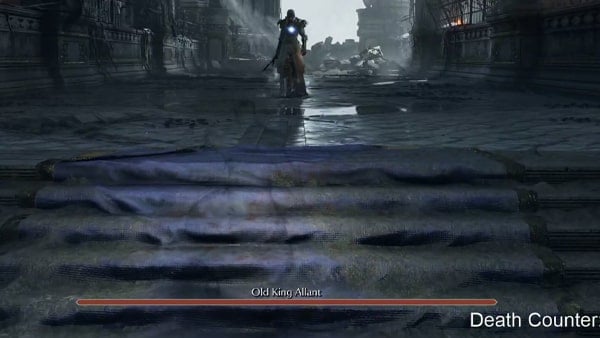 To learn more about the strategies on how to defeat this boss, you can check the video guide below or jump to the Old King Allant page. Once you've defeated the boss, the archstone will appear and you can obtain x1 False King Demon Soul. Now, return to The Nexus to prepare for the End Game.